Posted on September 1, 2007 by rogeroffice 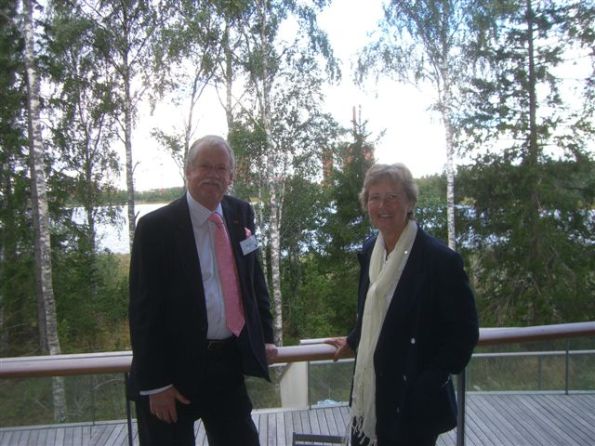 Caroline Jackson MEP (SW) and myself in front of the Olkiluoto nuclear plant in Finland, Aug 30th

The dyed-in-the-wool nuclear-phobes of the green movement still imagine that nuclear power is expensive.  They’re harking back to the sixties, when German Volkswagen camper vans had cute little “Nuklear? Nein Danke!” stickers, and oil was six dollars a barrel.  These Rip van Winkles seemed to have missed the fact that oil prices are now at ten times that level, and with demand from the emerging economies of Asia, unlikely to go down.  And other fossil fuel prices are rising alongside oil.  Nuclear is now not merely competitive.  It can actually deliver electricity at little more than half the cost of oil or gas — and that’s after costing-in the disposal of waste and eventual decommissioning.  If we make the costly move to carbon sequestration to remove CO2 from fossil-fuel power-plant emissions, electricity from gas and oil will be nearly three times the cost of nuclear.  Wind power is already at least three times the cost of nuclear, and is hopelessly unreliable.

The greens argue that nuclear power is not carbon-free.  What about all the diesel used extracting and transporting uranium ore, they ask?  Yet the total-system carbon emissions per megawatt of nuclear power are about the same as for wind (which is also not “carbon-free” when you add in the construction and erection of wind turbines), and far lower than those of bio-fuels.

Britain gets a meagre 18% of its power from nuclear, while France gets 80%.  That is why British consumers have seen massive rises in domestic electricity costs, while across the Channel rises have been modest.  Think what this means for industry.  Electricity is a major cost for many industries.  How are British companies to compete in global markets when they face such a penalty on power costs?  And companies desperately need reliable and stable supply and prices on major inputs like power.  Gas and oil prices are hugely volatile, whereas once a reactor is built, both the capacity and costs of nuclear energy are highly predictable and reliable.

There is a second massive economic advantage for nuclear.  With gas and oil, well over half the cost of electricity generated is down to fuel, whereas the corresponding figure for nuclear is about 5%.  With North Sea production set to decline, more and more of Britain’s oil and gas is imported.  If you buy nuclear electricity, then 95% of the price you pay feeds directly into the British economy.  But if you buy power from oil or gas, much of the price you pay goes straight to Saudi Arabia, and Russia, and Venezuela and Nigeria.  In simple terms, nuclear energy is a tonic for our hard-pressed balance of payments.

There is an urgent economic imperative to build new nuclear capacity, both to replace our current ageing nuclear fleet, and to go further and increase the percentage of low-cost power we get from nuclear.  But how do we persuade local communities to accept nuclear power stations?  It’s a remarkable fact that even in countries where the public are resistant to nuclear power, local communities around existing nuclear facilities tend to be in favour.  They see the benefits in terms in investment, infrastructure and jobs.  Familiarity breeds not contempt, but confidence.

I’ve just returned from a parliamentary visit to Olkiluoto in Finland, where two nuclear power stations have been operating safely and economically for decades.  The Olkiluoto facility is quiet, and clean, and actually not that bad-looking.  It’s certainly prettier than a steelworks.  When the power company applied for permission to build a third reactor on the site (currently under construction), the municipal authority voted 20 to 7 in favour.  Why?  Well one good reason is that such a reactor promises to deliver a major stream of local business taxes, steadily and reliably, for at least six decades.  Voters minded to oppose new power stations might think twice when they realise that a new reactor will mitigate their local taxes — and those of their children and grandchildren — for more than half a century.

It’s time to face up to the fact that nuclear generation is the cheapest, the safest, the most predictable, the most reliable mainstream, base-load power generation technology that exists today.  It would be folly to ignore it.

This entry was posted in Energy, Nuclear. Bookmark the permalink.