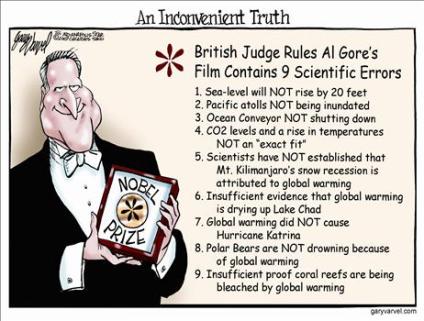 Al Gore’s disaster movie is fiction, like most disaster movies. The decision by the government to distribute it has been the subject of legal action by a concerned parent, Stewart Dimmock. Although a full ruling has yet to be given, the Court found that the film was misleading in  11 respects and  that the Guidance Notes drafted by the Education Secretary’s advisors served only to exacerbate the political propaganda in the film.In order for the film to be shown, the Government must first amend their Guidance Notes to Teachers to make clear that 1.) The Film is a political work and promotes only one side of the argument. 2.) If teachers present the Film without making this plain they may be in breach of section 406 of the Education Act 1996 and guilty of political indoctrination. 3.) Eleven inaccuracies have to be specifically drawn to the attention of school children.

15 Responses to Inaccuracies in Al Gore’s An Inconvenient Truth