Posted on October 8, 2009 by rogeroffice 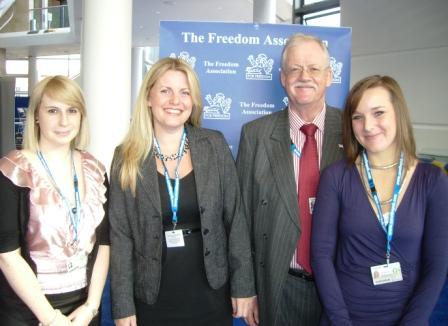 The Freedom Zone at Party Conference, organised by The Freedom
Association, was a huge success.  Located in the Bridgewater Hall, just
over the road from the G-Mex Centre where the main Party Conference was
taking place, it ran for two full days, Monday and Tuesday October 5th
and 6th.

The programme was supported by a great range of centre-right
organisations in and around the Party — or as I like to put it, “On the
Conservative wing of the Conservative Party” — plus others who share
our perspective without necessarily having a specific party affiliation.
We had a full programme of meetings throughout the two days, with
organisations participating including Conservative Home (Tim
Montgomerie); The Taxpayers’ Alliance (Matthew Elliott and Mark
Wallace); The Free Society; Conservative Way Forward; Big Brother Watch;
Conservative Friends of Israel; Conservative Future (Michael Rock); and
the Sunlight Centre for Open Government.

These days the Party Conference has become a very slick, stage-managed event, with little opportunity to engage in real, lively and contentious political debate.  One of the great strengths of the Freedom Zone is that it provides a forum for exactly that kind of debate, where heretical views can be dissected, and topics that might pass with little comment in the Conference proper can be given an airing — topics like the EU, and climate change, and political correctness.  In a way, the Freedom Zone provides exactly the opportunity for lively debate that used to exist at Party Conferences.

The Freedom Dinner at the Beluga Restaurant, Mount Street, was well
attended with over 110 diners, and was privileged to hear a stirring
speech in favour of British independence and self-determination from my
good colleague Dan Hannan MEP, the hero of YouTube — and of many
eurosceptic Conservatives.

Enormous thanks are due to all our co-sponsors and speakers, but
especially to the staff of the Freedom Association, who worked their
socks off: Director Simon Richards; Admin Manager Jane Broadhurst; and
our hard-working and enthusiastic intern Christiana.  Well done all.

3 Responses to The Freedom Zone