The scandal of the Derby Two

I have warned repeatedly that the European Arrest Warrant would lead to the extradition of British citizens to foreign jurisdictions, where their treatment would fail to meet decent standards of justice.  We now have a case in point, here 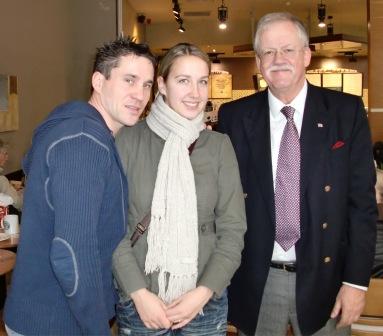 David Birkinshaw, Rachel Gee and myself

David Birkinshaw and Matthew Neale were enjoying a stag weekend in Riga, when they found themselves accused of assaulting a policeman.  There is no doubt that a scuffle of some kind took place, and a Latvian policeman claimed to have been hurt, although his injuries were described as “minor”.  It was never clear that the two Derby men had any part at all in the fracas.

Initially they came home to Derby, where David Birkinshaw was planning to marry his long-time fiancée, and mother of his child, Rachel Gee.  But both men were sent back to Latvia under the European Arrest Warrant, where they spent ten weeks in a Stalin-era prison described by Latvia’s own President as “not fit for animals”.  This was a time of appalling uncertainty.  For a long time they had no details of charges, no assurance of a trial date, no assurance that adequate translation would be provided — and the looming possibility that they might be found guilty, and imprisoned in dreadful conditions for a lengthy period.

David and Rachel’s wedding, of course, was cancelled.  Rachel Gee was in despair, as was their daughter.  They had few to turn to for help.  The British Embassy recommended an English-speaking lawyer, who in the end did a good job, but the Embassy provided little further help.  The line was that “Latvian justice must take its course”.  I spoke to friendly Latvian MEPs in Brussels, but their view was that there was considerable public resentment in Latvia against foreign stag party groups, and that the accused could expect little sympathy.

Eventually the trial took place.  No credible evidence was presented against the two men.  There was extensive CCTV coverage, but none showed any interaction between the accused and the policeman.  A number of witnesses expected to testify simply failed to show up for the trial.

The two men were acquitted and came home.

So two British citizens who insist they were innocent were sent to uncertain and degrading conditions in a foreign capital, in the absence of any credible evidence against them.   They (and I) are delighted they are back, but they and their loved ones have still suffered terrible uncertainty and anxiety, David and Rachel have had a wedding cancelled, and both men have three months loss of earnings.  And all for nothing.

I had the pleasure of meeting Rachel and David at the Starbucks café in Derby on Oct 23rd, and they struck me as thoroughly decent and respectable people.  They are delighted to have David home, delighted that the ordeal is over (though even now there is talk of an appeal), and they are planning a wedding next year.  One other piece of good news: the employers of both men have kept their jobs open, and they will be returning to work where they left off.  David makes turbine blades with Rolls Royce, and I commend the company on its fair and enlightened attitude.

But the overwhelming lesson is that the European Arrest Warrant cannot be allowed to stand.  It is an affront to British justice and fundamental freedoms, where a magistrate in bandit countries like Bulgaria or Romania or (next year perhaps) Croatia can require a British citizen to be sent abroad on the strength of no evidence at all, with no checks and balances, other than proof of identity.

As a minimum, we should require:

1  That the offence is sufficiently serious to justify sending the accused abroad;

2  That the accused is guaranteed the same rights and standards that he would be entitled to in the UK;

3  That there is sufficient prima facie evidence to justify a trial in the first place.

None of these conditions was met in this case, and the two accused have been the victims of a serious injustice.  I shall be writing to the Home Secretary on the issue.  And if I were the Derby Two, I should be talking to my lawyers about compensation.

1 Response to The scandal of the Derby Two