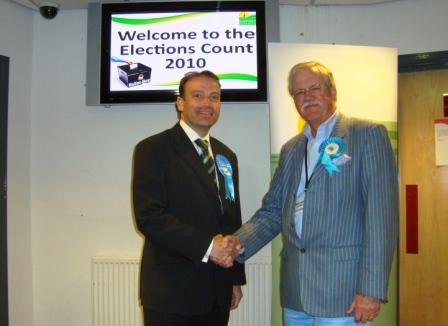 Very early in the morning of May 7th: At the Daventry election count with Chris Heaton-Harris MP

We are all, of course, horribly disappointed that we failed to get the majority Conservative government for which we had worked and campaigned for so long.  Yet we should not belittle the scale of our achievement: we all knew we had an electoral mountain to climb, and that the system was stacked against us, yet we gained nearly 100 seats.  I could scarcely believe the early projections based on exit polls, and as some of the early results came in those projections looked even more suspect.  Yet by breakfast time on Friday, we saw that they had been bang on the money.

I daresay that I was at least as astonished as Nick Clegg by the projection, borne out by the early hours, that after all the hoo-hah about a Lib-Dem surge, they would get fewer seats than in 2005.

I spent most of the night at the Daventry count with Chris Heaton-Harris, formerly MEP, now MP (see above).  But at 3:30 a.m. (a full five hours after my normal bed-time!) I could keep my eyes open no longer, so I’m afraid I missed the declaration.  But Chris did fantastically well, with over 56% of the vote.  Elsewhere in the region, congratulations are due to Nigel Mills in Amber Valley; Anna Soubry in Broxtowe; Louise Bagshawe in Corby; Pauline Latham in Mid Derbyshire; Heather Wheeler in Derbyshire South; Jessica Lee in Erewash; Nick Boles in Grantham; Andrew Bingham in High Peak; Andrew Bridgen in NW Leics; Karl McCartney in Lincoln; Nicky Morgan in Loughborough; Michael Ellis in Northampton North; Mark Spencer in Sherwood; and Stephen Phillips in Sleaford &NH – plus of course all those sitting Conservative MPs re-elected — some, like Philip Hollobone in Kettering, with greatly increased majorities.

Nevertheless, we are where we are, in a hung parliament, and it seems to me that we have two imperatives.  First, for our country we have to deliver stable governance and fiscal consolidation – and we have to do that quickly.  So Cameron is right to talk to Clegg.  Like many Conservatives, I personally hate the idea of having to do a deal with the Lib-Dems.  I hate their cynicism, their opportunism, their mendacity.  I hate the way they will tell diametrically opposite stories in adjacent constituencies – or even on adjacent doorsteps.  They will say anything to get elected – in the debates, Clegg even denied policies which were there in black and white in his manifesto.  Yet with them, we should have an overall majority in the Commons.  And anyway, I should also hate the pork-barrel politics of paying vast and unaffordable sums to Northern Ireland as the price for cooperation from the Unionists, even though in so many ways they would be much more agreeable bedfellows.

I am pleased that Cameron has drawn clear red lines on Europe, immigration and defence.  He was right to do so.  I am very comfortable with moves to reduce taxes for the low-paid – we should have been doing that anyway.  I am much less happy about the green agenda, but I suppose we have to make concessions somewhere, and the green agenda may well fall apart as the global warming “consensus” continues to disintegrate.  Certainly it is way down the public’s priority list.  On electoral reform, there is much we can and should do without giving way on PR.

Our second imperative, for our Party, is to regroup for the next General Election, which if previous precedents are followed will occur well before 2015, and maybe this year.  And for this reason we must avoid recrimination.  Given our disappointment at the result, it would be all too easy to start looking for scapegoats.  Easy, but wrong.  We must learn the lessons of this campaign, but we must not tear ourselves apart.  We certainly made some mistakes:

The TV debates: It was clearly an error to allow Clegg equal billing in the TV debates.  We may be inclined with hindsight to overlook the error, since in the event the Lib-Dems lost seats.  But without his three evenings in the limelight, it could well be that the Lib-Dem vote would have collapsed to the mid-teens.

The government’s record: This Labour government had done so badly it offered an open goal.  We could, and should, have been much more effective in attacking Labour and pinning the blame on them.

Immigration: We have a perfectly good immigration policy, yet for most of the campaign we seemed afraid to mention it.  Only when Clegg was on the spot over his proposed amnesty did we summon up the courage, rather tentatively, to talk about it.  Yet again and again our activists told me that it was the Number One issue on the doorstep.

A ham-fisted initiative: About a week before polling day, we announced that a Conservative government would “give consideration” to raising the status of civil partnerships by recognising them as “marriage”.  So in order to appease a strident minority, we were prepared to set at defiance the plain meaning of words; to overturn the wisdom, custom and practice of millennia; to affront a large part of our core vote; to dismay many Christians and Muslims; to dishearten our socially-conservative supporters; and (perhaps worst of all) to jeopardise the dignity and status of matrimony itself.  Not a very smart move from a Party which claims to put marriage and the family at the heart of its agenda.  Perhaps we should pay a little more attention to Chris Grayling, and a little less to the Party’s new Notting Hill orthodoxy.

And the outrageous treatment of a Conservative candidate: Philip Lardner is a friend of mine, and was Conservative Candidate for North Ayrshire and Arran.  He is also, as it happens, the Freedom Association’s point man for Scotland.  Yet he was dumped by the Party as its candidate, during the course of the campaign.  His offence, it appears, was to say that while all citizens should have equal rights, he personally, as a Christian teacher, was not prepared to teach homosexuality to the children in his charge.  To discipline a man for the simple expression of a conscientious view goes beyond mere political correctness.  It amounts to extraordinary intolerance.  It is positively Orwellian thought-policing, and we should be ashamed of it.  One wonders if the Party would have taken the same action if a Muslim candidate had expressed a similar view.