Human Rights issues to the fore 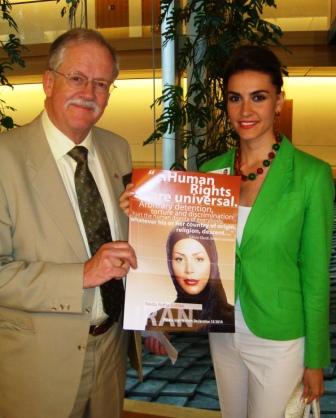 On Wednesday in Straz, I was focussing on Human Rights issues in two very different countries.

I attended the launch of a new Written Declaration on the situation in Iran.  Not, this time, the nuclear threat, serious as that is, but the gross repression of dissent by the Iranian régime — the beatings, the disappearances, the murders.  We all remember the heart-breaking pictures of the Iranian student Neda Agha-Soltan, on June 20th last year, (http://en.wikipedia.org/wiki/Death_of_Neda_Agha-Soltan), gunned down on the streets of Tehran by Ahmadinejad’s thugs, for no better reason than that she happened to be in the wrong place at the wrong time.  Her death alerted the world to what was going on that benighted country, but it was only the tip of the iceberg.  The cruelty and the repression go on.

Generally I avoid signing Written Declarations in the European parliament.  They are usually about something entirely laudable, like fighting diabetes or opposing corruption or protecting a threatened church in Bulgaria.  But they mostly call for new EU action, and new EU competence, as though Brussels were the only solution to every problem.  They also give MEPs, and the public, the wholly false impression that signing a piece of paper can change the world.

This time, however, I was happy to sign Written Declaration No. 2010/53, which simply condemns the behaviour of the Iranian government and draws attention to the continued abuses.  It’s not much, but at least the parliament can express its view.  The declaration was launched by an Iranian-Canadian Human Rights Activist Ms. Nazanin Afshin-Jam, President and Co-Founder of Stop Child Executions, singer, songwriter, model, actress, pilot, former Miss World Canada and Miss World 1st runner up.  See the picture above where we are holding a poster featuring an image of Neda Agha-Soltan. (See http://www.nazaninafshinjam.com/).

I was hardly out of that event when I was due to speak in the Plenary Session (In the presence of Baroness Cathy Ashton, the EU High Representative for Foreign Affairs, no less!) in the parliament’s debate on Korea and the sinking of the Korean frigate Cheonan by the North Koreans.  The speech itself is below; the video clip should follow shortly.  While the main issue was the sinking, I wanted to bring up the issue of human rights in North Korea, which is as bad or worse than that in Iran.  Worse, really, because it’s more systematic and entrenched, and affects not just dissidents but the whole population.  I’m afraid I used some very unparliamentary language to describe the North Korean régime, but I believe I was justified in doing so.  Again, I don’t imagine that a 90 second speech in Strasbourg will change the world.  But at least we can show the citizens of Iran, and of North Korea, that they’re not entirely forgotten.