There are holes in the sky where the CO2 gets out…. 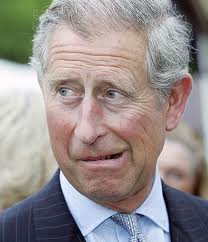 …And that’s what Climate Scepticism is all about”.  No.  Not Spike Milligan.  Prince Charles.

I have a lot of time for Prince Charles.  I agree with him on Church of England liturgy and the Prayer Book.  I think his watercolours are rather good for an amateur.  And I’m 100% on-side with his views on architecture (though his development at Poundbury, in Dorchester, threatens to give pastiche a bad name).

But on Climate Change, I’m afraid he’s up a gum tree (and probably talking to the leaves).

He says that “climate sceptics believe that CO2 escapes into space through holes in the sky”.  Is this a joke?  Is it some kind of monarchical post-modern irony?  Is he a closet sceptic trying to undermine the alarmist case by making it ridiculous?  Or does he believe it?  I’ve followed the debate closely for years, and I’ve never heard this bizarre suggestion before.  CO2 is a heavy gas and tends to go down, not up.

But the oceans will not become acid as they absorb CO2, and destroy hard-shelled marine creatures, because there is a range of buffering mechanisms.  Over the longer term, CO2 is sequestered into calcium carbonate and becomes rock.  If the alarmists were right about ocean acidification, the marine life we observe today would have been gone a very long time ago.  By geo-historical standards, today’s atmospheric CO2 levels are remarkably – indeed dangerously – low.  We need CO2 in the air to support plant growth and agricultural yields, and more would be better.

Prince Charles says that sceptics don’t understand the science.  But the fact is that he’s swallowed a simplistic, comic-book, Hollywood-Disaster-Movie version of the science, and he isn’t prepared to listen to the sceptic case.  I once offered to arrange a briefing for him from a small number of world-renowned climatologists, but his office politely declined.

8 Responses to There are holes in the sky where the CO2 gets out….