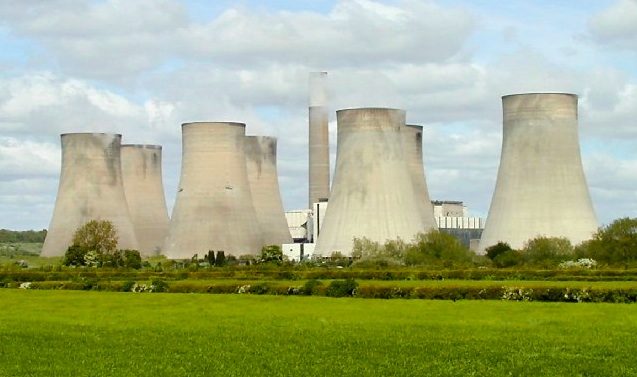 The Ratcliffe-on Soar power station in the East Midlands

Several recent reports have suggested that although carbon dioxide emissions in the UK have reduced in recent years, the figures are deceptive.  Put simply, much of our manufacturing has moved overseas.  If you want to know what emissions are attributable to our consumption within the UK, you have to add not only UK emissions but also the net “Embedded CO2” in our foreign trade.  And that net figure is positive.  So we are responsible for more emissions that the UK figures alone suggest.

The conclusion is that, while we cheerfully soldier on with our “green policies”, believing that we’re cutting emissions and saving the planet, we’re really doing no such thing.

There are of course a number of reasons why so much manufacturing is moving to developing countries, not least the low unit labour costs (or what we used to call, when I was in the textile business, “cheap finger markets”).

But there are clearly other reasons as well.  Laxer environmental standards overseas.  And the massive “green” costs and taxes which we impose on businesses in the EU, and in the UK.  We have carbon taxes, and the EU’s Emissions Trading Scheme, fraught with distortions and anomalies.  Recently Ineos, the UK’s largest chemicals company (I can remember when it was ICI!) has been threatening to close its chlorine plant in Runcorn, with the loss of 1000 jobs, because green taxes make it uneconomic to continue.

And it’s not just Ineos.  All energy-intensive companies are feeling the pinch.  Glass.  Metals.  Paper.   Cement.  These are the manufacturing companies that Cameron and Osborne are relying on to “rebalance the economy”.  But we’re driving them off-shore.

How’s this for a lose-lose deal?  The total emissions associated with UK consumption are going up, even as we kid ourselves that we’ve got them under control.  Businesses are moving to jurisdictions with lower environmental standards.  And in the middle of serious economic problems, we’re deliberately driving jobs, and business, and investment, out of the UK — and the EU — entirely.  Our green policies are damaging our economy, while doing  absolutely zilch for the environment.