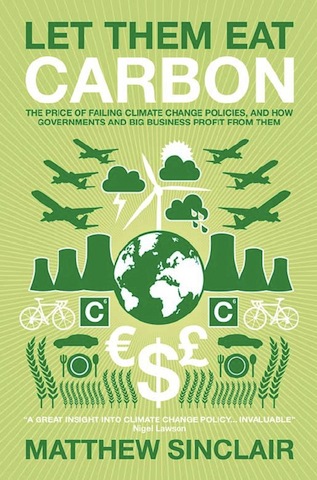 Sometimes there are good books.  And sometimes there are books that you really desperately wish you’d written yourself (though I doubt I’d have done it anything like so well).  Matthew Sinclair of the Taxpayers’ Alliance has written a book called “Let Them Eat Carbon”.  It’s not published until August 11th, but as I’ve been asked to submit a review by August 12th, the publisher has very kindly sent me a working draft, which I shall get stuck into over the weekend.  In the meantime, I have a press release from the publisher, Biteback Publishing, which I attach below to whet your appetite.  It includes quotes from Ruth Lea, Lord Lawsom, Chris Horner and others.

I shall report in more detail when I’ve finished the book!

AND HOW GOVERNMENTS AND BIG BUSINESS PROFIT FROM THEM

Ordinary people are paying a ruinous price for the attempts politicians make to control greenhouse gas emissions. Climate change policies dramatically raise electricity bills; make it much more expensive to drive to work or fly on holiday; put manufacturing workers out of a job and sometimes even make your food more expensive.

Climate change is big business. Much of the money so-called green policies cost us goes straight into the pockets of a bewildering range of special interests. Around the world companies are making billions out of the schemes governments have put in place saying they will curb global warming and protect us from the threat of climate change. There is little evidence that those policies are an efficient way to cut emissions. They simply do not represent good value, and the public are right to be sceptical.

In Let Them Eat Carbon Matthew Sinclair looks at the myths perpetuated by the burgeoning climate change industry, examines the individual policies and the potentially disastrous targets being put into place by ambitious politicians, and proposes a more realistic alternative.

“This book offers a great insight into the increasingly important but poorly understood world of climate change policy. Anyone who wants to understand how they are affected, and what can be done about the gross failure and exorbitant cost of politicians’ attempts to curb greenhouse gas emissions, will find it invaluable.”

Lord Lawson, author of An Appeal to Reason

“It is level ground that when the state robs Peter to pay Paul it can count on Paul’s enthusiastic support. As Matthew Sinclair reveals in Let them eat carbon, nowhere is this more true than with the modern fashion of climatically meaningless, environmentally harmful and economically ruinous ‘green’ statism.

Sinclair explains not only how this scheming is so disastrous, but how it all must end (hint: badly). Deliciously, while also giving co-promoters Big Green a well-deserved outing, Sinclair also exposes an ugly truth: quite often, the entire enterprise was Paul’s idea to begin with.”

Chris Horner, Senior Fellow at the Competitive Enterprise Institute and Author of The Politically Incorrect Guide to Global Warming (and Environmentalism)

“Matthew Sinclair’s book combines real rigor in analysis of the costs and benefits of various proposals to address the problem of climate change, with an accessible and jargon-free presentation.”

Jim Manzi “Putting aside the scientific doubts about the theory that dangerous global warming is driven by manmade carbon dioxide emissions, it is absolutely vital that the people of this country are aware of the huge costs that are being incurred, and will be incurred, in pursuing Britain’s ambitious plans for decarbonising the economy. Plans, one might add, that will not be followed by much of the rest of the world. The switch to costly low-carbon, renewable sources of energy is already costing households and businesses dear. And it will get much dearer – further damaging people’s living standards and undermining business’s competitiveness.

A terrifically well-researched, well-argued and persuasive exposition of the huge economic and personal costs of our current energy policy. Read it. And heed it.”

5 Responses to Let Them Eat Carbon