Culture Corner: Much Ado at the Globe 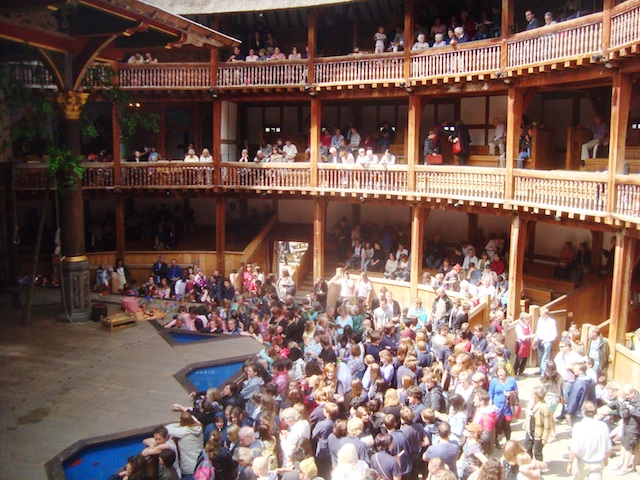 For years I have been telling myself that I must, just must, go and see Shakespeare’s Globe Theatre in London on the South Bank of the Thames.  Finally, on Tuesday, I got round to doing it at last, to see “Much Ado About Nothing”  (apparently, and according to the programme notes, “nothing” was a common euphemism in Shakespeare’s time for  …. ahem … well I’ll leave it to your imagination).

We took the train from Market Harborough to the Victorian glories of Saint Pancras, newly restored, and walked past the splendid sculpture of that former champion of St. Pancras, John Betjeman, with the lines from his poems set into the pavement.  The tube took us to London Bridge station, and we walked along the South Bank riverside towards the Globe.

I don’t think I’d ever walked quite that route before, and I was delighted by the  proliferation of interesting restaurants, bars and hostelries along the route, plus the splendid views of Saint Paul’s (and of the erotic gherkin).  The route runs directly past another reconstruction — the replica of The Golden Hinde, the Tudor warship in which Sir Francis Drake circumnavigated the world.  Now it’s a “Living History” exhibit, which you may also hire for functions.  The main impression I formed was that it is a remarkably small vessel in which to sail around the world — although I suppose no smaller than Charles Darwin’s Beagle, in which he performed a similar journey several centuries later. 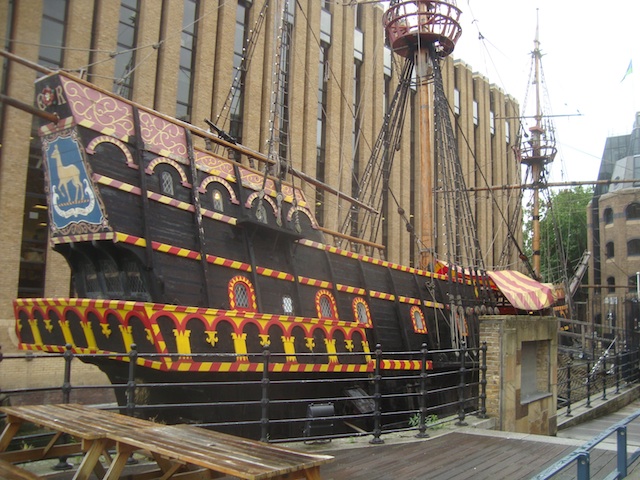 Of course today’s Globe is a recent reconstruction of The Bard’s theatre, on (almost) the same site.  Perhaps we as Brits should be ashamed that it was a prominent American, Sam Wannamaker, whose tireless efforts brought about the reconstruction project.  For the most part, it’s as faithful a reproduction as was possible, given that we have no detailed pictures or plans of the original.  But in two respects we know it’s different.  It’s believed that the original would have been carved, painted and gilded all around in great detail.  That’s been done in the new Globe on the stage and the immediately adjacent area, but for the rest, the unseasoned English oak timbers have been left in their natural state.

Likewise on the exterior, where it is believed that in Elizabethan times the whole surface would have been white plaster, the new version has exposed oak beams — not, apparently, because they are authentic, but because that is what the 21st Century public expects in such a building.

The actual performance of the play was vibrant, imaginative and exciting.  We sat in the mid-level gallery, sheltered from the rain, but the “groundlings” — those audience members standing in the base of the theatre — were entirely exposed to the weather.  We had April showers in July, and plastic macs were donned and doffed regularly throughout the performance.

I particularly liked one character — the comic constable Dogberry.  The actor played the part for laughs, with huge success, and somehow he reminded me irresistibly of a recent leader of our Conservative MEP delegation.

1 Response to Culture Corner: Much Ado at the Globe