Posted on October 5, 2011 by rogeroffice

What I’d have liked David Cameron to say 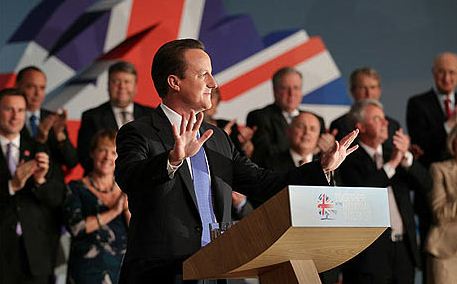 My fellow Conservatives: Behind me, you see the words “Leadership for a Better Future”. Today I want to tell you a little bit about how we shall achieve that future.

On Monday, George Osborne gave an excellent speech on the economy, and mentioned a number of measures which will help to promote growth. But much more needs to be done. We need to deregulate employment, and return to the flexible and competitive labour market that powered Britain’s growth in the Thatcher years. For that reason, I can announce that we shall do away with the Working Time Directive, the Agency Workers’ Directive, the Minimum Wage Regulation, and a range of other current measures that stand in the way of prosperity. You will ask ‘How can we do this, given EU law?’ The answer is simple. The British economy can no longer carry the burden of EU regulation. We will make it clear to Brussels that we will not recognise these measures, nor any court ruling against us on these issues.  Nor will we entertain any proposed sanction or penalty.

There is more. While we remain committed to the Chancellor’s fiscal consolidation plan, we equally recognise that the future cannot be secured without growth. We believe on the one hand that growth requires lower taxes, and on the other hand that growth will enable us to afford lower taxes. We will shortly be announcing a cautious but significant programme of targeted tax cuts, aimed laser-like at promoting jobs, growth, and investment. This will also help in rebuilding confidence.

We will immediately sweep away the damaging 50% income tax rate which raises no extra revenue but which constrains economic activity.  It is a tax which exists purely for presentational reasons, and the economy cannot afford it.

George also announced, quite rightly, that we would not countenance any strengthening of green policies and emission targets, which would damage industry, and drive energy-intensive businesses off-shore.  But we must go further.  I am announcing today a wholesale review of our energy policy, and a major shift away from wind power, which is hopelessly inefficient and costly. Our obsession with wind is forcing millions of households into fuel poverty, and is undermining the competitiveness of our economy.

Instead we shall focus on nuclear, gas and coal. We shall advise the EU Commission that we are unable to conform to their Large Combustion Plant directive, which would require the closure of major coal-fired power stations by 2015.  Again we will not accept any legal sanction or penalty from Brussels.

I do not myself believe that our present Secretary of State Chris Huhne will be able to pursue this new policy direction with the necessary conviction (although he may have other convictions to worry about).  I am therefore removing him from his present role.  He will be replaced by John Redwood.

We have heard a great speech from Home Secretary Theresa May.  Her moves to tighten immigration and facilitate the deportation of illegal immigrants are exactly right.  However, we must go further. Theresa has said that we should scrap the European Human Rights Act.  I agree, and we will do so.

Fellow Conservatives: You will have noticed a recurring theme in my remarks. The problems we face in employment, in energy policy and in Theresa’s department stem from Brussels.  It is time for radical action.  We must lance the boil.

There is yet another threat from the Commission. The proposed Financial Transfer Tax is a dagger aimed at the heart of the City of London. In effect they are asking London to pay for the Euro bailout. We can never accept this.

Earlier this week I said that membership of the EU was vital for British trade.  However, on further reflection, I have realised that there is no real benefit to Britain in being part of a protectionist Customs Union.  Britain is a great global trading nation, with unrivalled links to the Anglosphere. ,It is quite wrong that we should link ourselves exclusively, or preferentially, to an economic area which was already in long-term economic decline even before the Euro crisis dealt it a coup de grace.

Our membership of the EU has lasted too long for any good it may be doing.  As my colleague Dan Hannan says, it is making us poorer, and less democratic, and less free.  We believe in trade and co-operation in Europe, but we cannot accept government from Brussels.  We will accordingly use the current Eurozone turmoil as an opportunity to negotiate an entirely new relationship with Europe — a relationship based solely on free trade and voluntary intergovernmental co-operation.

Fellow Conservatives, I spoke to start with about leadership for a brighter future.  The future I offer you is a future of freedom, independence, democracy and prosperity.  That is my commitment to the Conservative Party and the nation. (Applause.  Standing ovation)