Churchill and the United States of Europe

Posted on November 9, 2011 by rogeroffice 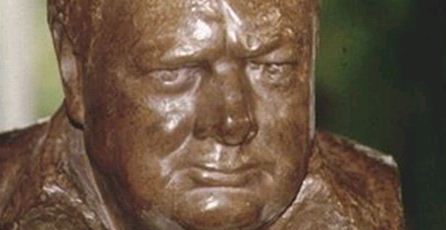 The bust of Churchill by Nemon stands on the main stairway in Churchill College, Cambridge

Most conservatives have a huge regard for Sir Winston Churchill, and he certainly seems to have been a thread running through my own experience.  I recall that when I became twenty-one, an elderly aunt asked what I’d like for my birthday, and I tentatively requested the first volume of Churchill’s four-volume “History of the English-Speaking Peoples”.  In a burst of generosity, she gave me the whole set, and now, nearly half a century later, I still treasure them.  They were my introduction to the Anglosphere.

I recall that when applying for a place at university, I got as far as booking a berth at the Churchill Hall of Residence (now no longer there, I’m afraid) at my third-choice university, Exeter.  I was back at Exeter University recently for a debate on nuclear power.

But in the end I was offered a place at my first-choice university, Churchill College, Cambridge, where I read mathematics.

I made a visit a couple of years back to the Churchill Archive at Churchill College, where I saw not only the original drafts of the famous wartime speeches — typescripts with hand-written editorial amendments by the great man himself — but also a couple of later acquisitions: Frank Whittle’s slide rule, and one of Margaret Thatcher’s famous handbags.

So I feel a modest degree of ownership in Churchill’s legacy, and few things annoy me more than seeing opinions attributed to him which would have him turning in his grave.  Europhiles love to claim him as one of their own.  A building in the Strasbourg parliament is named for him — disrespectfully abbreviated to “The WIC Building”.  But was he not a great European statesman, they ask?  Did he not urge the creation of a United States of Europe?

Yes and No.  He passionately wanted to ensure that the horrors of 1914/18 and 1939/45 were never repeated in Europe, and he therefore supported a close alliance of France and Germany — whose differences and enmities had dogged the continent since at least the Franco-Prussian war. He saw the United States, Great Britain and Russia as sponsors and facilitators of this new détente in Europe.  But he had no intention that Britain itself should be part of any United States of Europe, and would be horrified to see the country he loved, and saved from invasion, now reduced to little more than an offshore province governed from Brussels.

He saw Britain as having the good fortune to be placed by geography and history in a hugely advantageous position: at the centre and confluence of several vital spheres of influence — Europe; the Americas, the Commonwealth (which we have so sadly neglected) — not as being absorbed into any of those spheres. So let me repeat a quotation which is very familiar indeed, yet cannot be stressed too often: “We have our own dream and our own task.  We are with Europe, but not of it.  We are linked, but not comprised.  We are interested and associated, but not absorbed.  And should European statesmen address us in the words that were used of old: ‘wouldest thou be spoken for to the King, or the Captain of the Host?’, we should reply with the Shunammite woman “Nay Sir, for I dwell among my own people’”.

7 Responses to Churchill and the United States of Europe