Posted on January 4, 2012 by rogeroffice 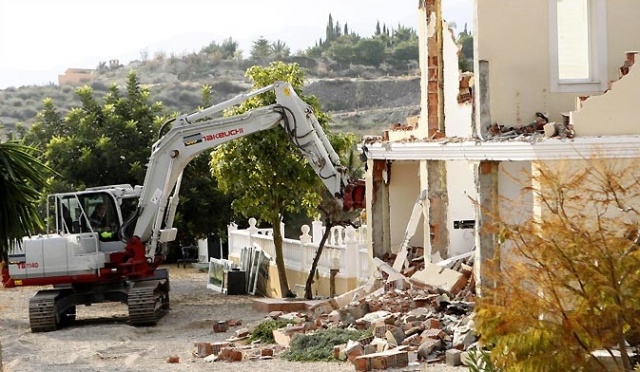 Some problems in an MEP’s mail-bag seem to be perennial.  They just keep on turning up.  Like the “Euro-Cities Directory Scam”, where the victim — usually a small business owner — thinks they’ve merely confirmed their contact details, but then receives a stream of dunning letters demanding €1000 for the “directory entry”.  Best advice: Don’t reply.  Don’t pay.  Don’t enter into correspondence.  I am not aware of any victim who has been pursued in the courts, and I don’t believe any British court would recognise the debt.

But the biggest perennial problem is the Spanish property scam.  I say Spanish: I have had examples from Portugal, Cyprus, Bulgaria, Croatia and so on.  But the overwhelming majority are from Spain.  The picture above is a case that was reported in the Sun in 2010.   I have written about it before, but cases keep coming up, and I make no apology for returning to it.

There are two basic issues.  One is the Spanish Coastal law, where retrospective rules are applied to properties built within a set distance of the shore.  The owners may have undertaken due diligence; used a local lawyer; checked title and land registry (if one exists); but this is no defence.  Properties are repossessed or destroyed.  Somehow the law seems to be no impediment to large-scale hotel or apartment developments, often on land that was found to be illegal for individual dwellings.

Then there is the corrupt nexus of local lawyers, planning officers, politicians, mayors and construction companies, who find ways of making properties retrospectively illegal, usually for the enrichment of locals.  This can apply to properties anywhere, whether or not near the coast, and (again) despite due diligence.

Added to this, there is the increasing problem of developments started (perhaps) in good faith, where the developer, in today’s climate, simply goes bankrupt, and buyers who have paid out large deposits have no redress.

These problems apply to large numbers of Brits, including many who have sold a UK property and invested their life savings in a dream villa on the Costas, only to find an eviction notice on the doormat and a bulldozer at the gate.  Many are left penniless.  And there is no redress.  The Petitions Committee of the European parliament (on which I sit) has worked on this for ten years.  We have berated the Spanish government (the government blames the regions and the regions blame the government — no one is responsible).  We have berated the Commission.  What about the “Right to Property” enshrined in the Charter of Fundamental Rights?  Ah, but the Charter only covers abuses of EU law, and this is Spanish national law.  Believe me, there is no redress.  I have seen hundreds of cases, and I cannot recall even one with a happy outcome.  Those who seek legal remedies find they are tied up in proceedings of Dickensian complexity, and are throwing good money after bad.

I say a large number of Brits, but there are victims from all EU countries, including Spain itself.

Spain is not a country under the rule of law as we know it.  The rights of property, enforceable contracts, redress in the courts are often denied.  Do not assume that because we’re all in the EU, the same standards apply.  They don’t.

As an MEP, I can’t offer investment advice.  But without prejudice and without commitment, I can offer some observations about how I might approach it if I were to decide to invest in Spanish property.  Whether you choose to adopt the same approach is up to you!

I should never, ever buy “off-plan” — that is, buy a property not yet built.  If the developer goes bust or absconds, you have no redress.  Much better to buy an established property that has been in place for years.  If asked for a deposit, I should try to agree to the funds being placed in an escrow account, ideally in the UK, against delivery on time and to spec.  I should do thorough research amongst local Brits and ex-pats to find a local lawyer with a good reputation for honesty and effectiveness.  I should also make enquiries about any developer or management company involved, and if buying on a development I should want to talk carefully to other residents about their experience.

For advice in one word about buying Spanish property, I should say “Don’t”.  But look on the bright side: given the appalling economic position in Spain, I am sure there are great bargains to be had.  You might make a fortune.  Or you might lose your shirt.

There’s a Betjeman poem that might stand as an awful warning to those tempted by the Spanish dream.  It’s called “The Costa Blanca”, and it takes the form of two sonnets:
SHE

The Costa Blanca! Skies without a stain!
Eric and I at almond-blossom time
Came here and fell in love with it. The climb
Under the pine trees, up the dusty lane
To Casa Kenilworth, brought back again
Our honeymoon, when I was in my prime.
Good-bye democracy and smoke and grime!
Eric retires next year. We’re off to Spain!

We’ve got the perfect site beside the shore,
Owned by a charming Spaniard, Miguel,
Who says that he is quite prepared to sell
And build our Casa for us and, what’s more,
Preposterously cheaply. We have found
Delightful English people living round.

Mind if I see your Mail? We used to share
Our Telegraph with people who’ve returned —
The lucky sods! I’ll tell you what I’ve learned:
If you come out here put aside the fare
To England. I’d run like a bloody hare
If I’d a chance, and how we both have yearned
To see our Esher lawn. I think we’ve earned
A bit of what we had once over there.

That Dago caught the wife and me all right!
Here on this tideless, tourist-littered sea
We’re stuck. You’d hate it too if you were me:
There’s no piped water on the bloody site.
Our savings gone, we climb the stony path
Back to the house with scorpions in the bath.