Posted on February 4, 2012 by rogeroffice 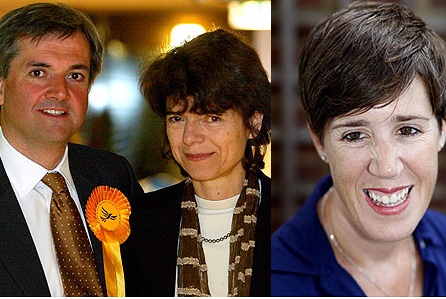 They said of John Major (re Edwina) that it wasn’t so much his morals as his taste that let him down. Same goes for Huhne.

You’re probably sick to death of reading about Chris Huhne, but bear with me: this may be a new angle.

It was self-indulgent of me to Tweet “Hurrah for Huhne’s departure!” yesterday, but I just couldn’t resist.  We see again one of the oldest truths in politics: it’s not the original misdemeanour that gets you.  It’s the mess you get into with the cover-up.  Oh what a tangled web we weave, etc etc.

I’ve been astonished by some of the comment on his resignation.  Some are saying that Nick Clegg is alarmed at the idea of a disaffected Huhne on the back benches, where his “powerful intellect” and his “expertise in economics” will be a huge threat to Clegg’s leadership.

Hang on there!  “Powerful intellect”?  And “expertise in economics”?  What planet are they on?  Let’s recall that in 2002, Huhne was co-author of a booklet “Why Britain must join the Euro”.  This economics expert assured us that “Joining the €uro would increase our incomes and standard of living” (like it did for Greece?).  That the €uro was a huge success, that its critics had been proved wrong at every point.  Oh Yes, Chris.

And does he have the good sense and decency to admit in 2012 that he was wrong in 2002?  He does not.  On the contrary, he dismisses eurosceptic Conservatives as “Tea Party Tories”.  (As is so often the case, an intended insult could well be adopted by its targets as a badge of pride.  I’d be happy to be a Tea Party Tory).

There’s a clear pattern here.  Far from demonstrating intellect and economic expertise, Huhne demonstrates slavish commitment to an ideological proposition — European Monetary Union — and an inability to check ideology against the facts on the ground.  This leads him into disastrous policy prescriptions.  Fortunately, in the case of the €uro, he wasn’t able to drag the British people with him down his European cul-de-sac.

Sadly, this was not the case with his other main ideological idée fixe, climate change.  On the environment, David Cameron decided to put the fox in charge of the hen-house.  For a year and a half, Huhne has been in charge of the quaintly-named Department of Energy and Climate Change.   And he has done huge damage with his lunatic wind-power plans which will take decades, and huge sums of money, to repair.  He has arguably done more damage to the visual environment in Britain than anyone since the Luftwaffe — and even they generally left the countryside alone.

The Climate Change Act may have been a crime perpetrated by the previous Labour Administration, but they’ve been enthusiastically abetted, since mid-2010, by Huhne, in the role he has so recently vacated.  The energy policies of this “economic expert” threaten to bring our economy to its knees.  He has presided over policies which will massively add to industry’s costs, and undermine Britain’s competitiveness.  They will drive — are driving — energy intensive industries out of the UK altogether.  They will cost us jobs, and investment, and prosperity.  They will (unless rapidly reversed) impoverish our grandchildren.

Huhne’s policies will also lead to extensive power outages and black-outs by the end of the decade.  Huhne seemed blissfully unaware that if he wanted massive new capacity from randomly intermittent generating technologies, he would also need conventional back-up, which for technical reasons pretty well has to be gas.  Nor does he realise that if he’s going to need the same capacity all over again, in gas, he may as well just build the gas and forget the wind power.

And if his policies are a disaster for industry and competitiveness and energy security, they are equally disastrous for voters, for families, and (especially) for pensioners.  Wind power is hugely regressive.  It takes money from poor pensioners (on their electricity bills) and gives it in subsidies to wealthy land-owners and power companies.  So much for the Lib-Dems’ much-vaunted fairness and social justice.  Chris Huhne will be largely responsible for a million additional households being forced into fuel poverty.  And it’s not too melodramatic to say that he will be largely responsible for thousands of unnecessary excess winter deaths from cold-related causes.

So we have good reason to applaud his departure in tawdry circumstances.  The tragedy is that he wasn’t ousted before he did so much damage.

10 Responses to Huhne: ideology before rationality