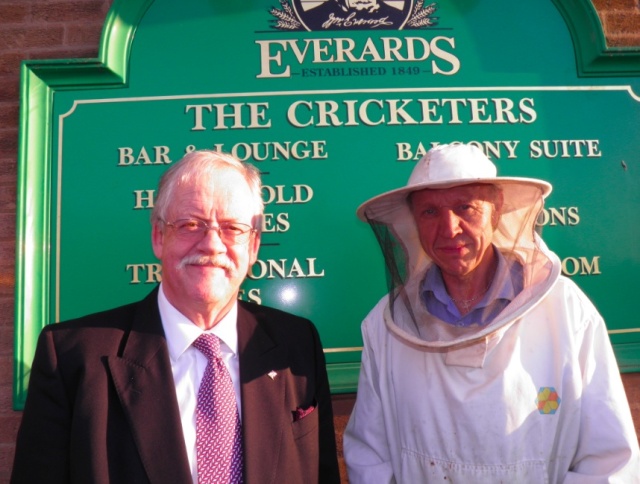 With Petar Bogunović of the Leics & Rutland Bee Keepers’ Assn

On May 31st I had the pleasure of meeting the Leicestershire and Rutland Bee Keepers’ Association, at the Cricketers Pub in Grace Road, Leicester, near the cricket ground.

We have a problem with bees.  To read the media, you might think bee numbers were halving every year.  It’s not quite that bad, but the bee keepers I met at the Cricketers were losing up to 25%.  And this is a very real national problem, because bees are a major factor in the pollination of plants.  On some estimates, if bees disappeared overnight, crop yields could drop by 30%, and we’d all be very hungry.

So why are bees and hives dying?  The first factor is the Verroa Mite.  This is a mite that parasitises bees.  It arrived in the UK in 1992, from Europe (so many problems come from Europe).  It’s quite large — visible to the naked eye.  Indeed pro rata, a bee with a mite is like a human with a dinner plate.  Not only does the mite itself damage the bee, but by piercing the bee’s epidermis, it allows direct access to otherwise fairly harmless viruses that may exist in the hive.

Verroa can be controlled, though not eliminated, by the application of oxalic acid while the bees are hibernating over the winter.

But there’s more to it.   Loss of habitat may be a factor.  One member of the Association argued that local authorities should be a little more circumspect in mowing roadside verges in the countryside, perhaps delaying mowing until after the summer flowering season.  Freshly-mown verges may please the tidy bureaucratic mind, but they do nothing for insects.

Then there appears to be some evidence that widely-used agricultural pesticides may play a part, especially a new class of pesticides called neonicotinoids.  The industry argues against this, and has done experiments showing that the application of these chemicals to bees does not appear to kill them.  But there is also some disputed research suggesting that while not killed, the bees are disoriented.  If they have trouble finding feeding grounds, and returning to the hive, they will die anyway.

How to decide?  The EU has been undertaking research on the issue, to be published shortly.  First indications are that it may support the case against the pesticides.

We’ll see what comes out of the EU’s research study.  There are several conferences and seminars on the issue in Brussels in the next couple of weeks.  But if only we could overcome the concerns — I might say the paranoia — of the Greens and the chattering classes about GM crops, they might offer a way out of the impasse.  One of the key objectives of GM development is to create varieties with an in-built resistance to common crop diseases and parasites.  Use of such crops could radically reduce farmers’ dependence on pesticides, and this in turn might be good news for bees.  The crop varieties would of course need to be rigorously tested to show that their in-built resistance was not in itself a threat to bees or other beneficial insects.

I shall keep a watching brief on bee developments in Brux.  Like Winnie the Pooh, I’m rather fond of honey.

3 Responses to Saving the bees