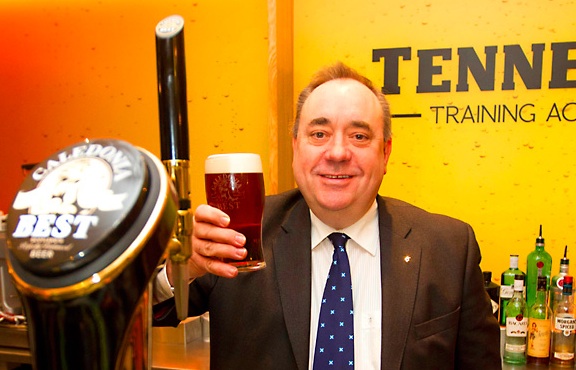 Yesterday I attended a seminar on Minimum Unit Pricing (MUP) on alcohol.  It was organised by my good friend Struan Stevenson MEP (who is also a redoubtable campaigner against wind farms).  And it was attended by representatives of the wine, beer and spirits industries.  Currently Scotland has decided to bring in MUP, while the UK government is considering the idea for England and Wales.

We heard from lawyers and industry representatives.  And it turns out that there are some serious problems with MUP.

For a start, an immediate effect of MUP will be that retailers’ margins on cheap drinks will be suddenly and substantially increased.  So what will they do?  Like any good retailer, they’ll put effort and resource behind high-margin products.  In short, they’ll promote exactly those cheaper drinks that MUP-proponents are worried about.

Secondly, consumer research shows that price elasticity is lowest amongst the very problem drinker groups that MUP-proponents have in their sights.  The heavy drinkers, and the young drinkers, are the groups least likely to reduce purchases and consumption in the face of higher prices.  They’ll keep drinking, and if necessary, they’ll cut spending in other areas.  The people who will suffer are moderate and responsible drinkers, and especially pensioners and lower-income drinkers who can least afford higher prices.  Seen simply as a social engineering tool, MUP is a very blunt instrument and unlikely to achieve its desired effect.

Thirdly, there’s a problem with EU law.  Wine is classified, rightly, as an agricultural product, and it’s tied up and hedged around with a mass of EU legislation designed to ensure fair competition and a level playing field.  The advice from yesterday’s lawyers was that the MUP proposals would drive a coach and horses through EU legislation.  And while I’m all in favour of defying EU law, I’m not sure that either Alex Salmond or the Coalition shares that view.

But the fourth problem seems set to be the real killer.  There’s a huge hole — almost literally — in the MUP plan.  These days more and more retail purchases are made via the internet.  And there’s nothing to stop a Scottish consumer — or a Scottish organisation planning a party — from ordering via the web from an English supplier (or if England also goes for MUP — from a continental supplier).  And clearly, within the EU, there’s no way that Scotland can police its borders against imported liquor, or apply a Scottish MUP-duty on crates of ale.

This is an idea that’s not going to fly.  And it leaves poor Alex Salmond looking a bit of a muppet.