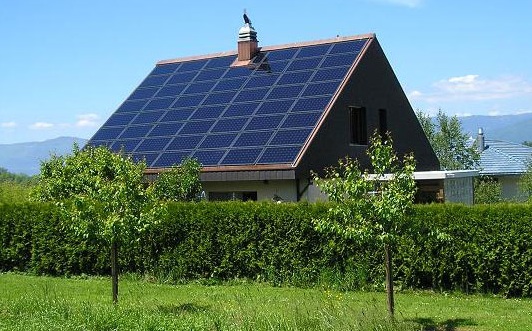 I recently saw an interesting idea in an in-coming e-mail.  I believe the idea may have originated in the book “Freakonomics”.  It points out that solar PV panels are black, so they absorb in-coming radiation very effectively.  But they convert only about 15% of that solar radiation into electricity.  So where does the rest go?  Obviously it becomes heat.  It warms the panel.  And where does the heat go?  Partly it will be convected by adjacent air.  Partly it will radiate.  But as a (relatively) cool object, radiation from a solar panel will not radiate back to space — it will be trapped in the atmosphere.  All this heat, therefore, will be trapped on the earth and arguably contribute to “global warming”.

Of course we need some caveats here.  The theoretical “black body” beloved of physicists has a matt finish.  But solar panels tend to be shiny.  Some of the radiation incident on them will be reflected straight back into the sky.  And then of course solar panels sit on roofs which may have been dark or light to start with.  My own 2.4KW system replaced dark grey slate tiles, so may well absorb no more heat than previously.  But panels on lighter roofs will undoubtedly increase energy absorption.

I wasn’t sure of the answer to this complex question, so in a spirit of innocent enquiry, I asked the question on Twitter.  And I was astonished by the instant and vituperative response.  Most seemed to assume that I’d made an assertion, rather than asking a question.  Most pretended to assume that because they disagreed with the assertion they thought I’d made, I must be ignorant of science.  Sorry, guys, but we Cambridge maths graduates do know a little bit about physics, generally speaking.

Here are some examples: Rachel Pearce ‏@rachelpearce  @RogerHelmerMEP Your pitiful grasp of physics makes me utterly ashamed that you are my MEP.

Voting Floater ‏@VotingFloaterUK  To be fair, it’s a valid question. Although the answer is clearly a resounding NO!  (“Clearly”, floater?).

Dr Matthew Aylott ‏@renewablewriter “Do solar panels add to global warming?” I hope this is a parody account because that is a very silly thing to say otherwise.

Davis Carlton ‏@DzCarlton  What happens to sun energy that does not hit solar PV?! Why not ask someone with a clue instead of speculating nonsense?!  (But I thought I was asking, Carlton).

One idiot even suggested that the excess heat would dissipate at night, and therefore didn’t matter, as though heat at night were different from heat in the day.

Of course the short format of Twitter leaves room for vituperation and ridicule, but not much for developing an argument.  So I was grateful to Simon Evans, who at least posted a link to an article on the Real Climate web-site purporting to refute the case against solar PV.  Read it here.    I read it with great interest — though it’s couched in patronising and dismissive terms.

The nub of it seems to be just two points.

The first is that the total area of solar PV panels compared to the area of the earth is trivial, so we need not worry about it.  But that wasn’t the question.  We didn’t ask if there were too few solar panels to contribute much to global warming.  We asked whether any given square metre of solar panel would increase, or mitigate, warming.  And the answer will not depend on the total installed area of solar PV panels in the world.

In this context, I was interested to see that the article’s own estimate of the additional “waste heat” generated by solar panels came in at 125 watts per square metre.  My own back-of-a-fag-packet calculation suggests that my own solar panels, under ideal conditions, generate about 80 watts per square metre. So the additional waste heat exceeds the electricity generated.

But the key point in the Real Climate piece is that any excess heat generated in the solar panel will be outweighed by the saving in CO2 emissions that would otherwise have occurred (if the electricity had been generated from fossil fuels).  This is a highly contentious area, with the climate debate dominated by the feed-back issue.  There is no doubt that atmospheric CO2 tends to increase temperatures.  The IPCC postulates additional positive feed-backs that would triple the effect of CO2 alone.  But some sceptical scientists argue that there are also negative feed-backs (increased cloud cover/albedo for example), and that net feedbacks may be negative overall.  Certainly the total absence of further global warming this century strengthens the case for negative feed-backs.

But the Real Climate case also relies on the implicit but facile assumption that every KWh generated by wind or solar means one less KWh generated by gas or coal, with a corresponding reduction in fuel consumption and emissions.  This assumption (on which the whole of the renewables industry depends) is demonstrably false.  Several recent papers, most notably that of Professor Gordon Hughes of Edinburgh University  points out that renewables are intermittent and unpredictable.  They therefore require conventional back-up, usually gas, to be held as “spinning reserve”, able to cut in at a moment’s notice when the wind drops or a cloud obscures the sun.

But keeping this capacity going as spinning reserve is a bit like running the engine on a stationary vehicle.  It burns fuel and creates emissions without going anywhere.  More generally, gas power plants are much less efficient when constantly turned on and off, than when run consistently.

Professor Hughes concludes that when you look at the whole system, renewable plus back-up, the emissions savings achieved by renewables are somewhere between trivial and zero.  Of course Professor Hughes’ work pertains specifically to wind power, but the same considerations apply to solar.  Both wind and solar are intermittent and unpredictable.

So the fundamental point of the Real Climate rebuttal is open to question and probably wrong.  And the whole question is much more complicated than the facile responses on Twitter try to suggest.  I don’t pretend to know the answer to this rather complex issue, but I’m inclining to the view that solar PV is a waste of money, even for those who believe in anthropogenic global warming.  Unless, of course, you’re making whacking subsidies out of it.