An attack on the Lincolnshire countryside 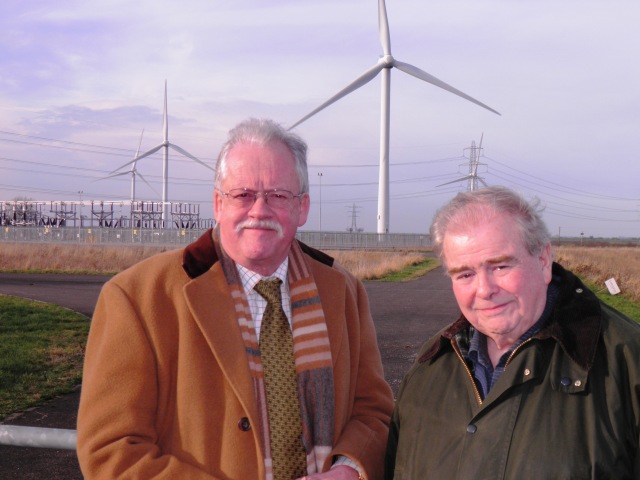 Try to imagine 350,000 vehicle movements, mostly lorries, in three years, down a ten-foot-wide country lane with few passing places.  That’s over 300 a day, every day, including weekends.  Plus 120,000 tons of rock and hardcore to provide a foundation for an electricity substation in the fens.  Water mains serving the local community broken by weight of traffic and construction work, fifty-seven times during the three years — with supplies lost for three days on one occasion.  Think of Cowbridge Road — that’s its name — a sea of mud in wet weather, a desert of dust in the dry.  Not so much the Lincolnshire fens — it sounds more like the retreat from Moscow.

I could scarcely believe the numbers when I first heard them, but they are provided by Lincolnshire County Council, which monitored the traffic.  This was a project to build thirteen wind-turbines and the sub-station in unspoiled Lincolnshire fenland.

On January 12th I went to Bicker Fen, near Boston, Lincs, to meet Mr. John Bowler, who lives in Cowbridge Lane with his wife, three horses and a couple of dogs.  Mr. Bowler is not in the best of health, yet he’s had to put up with the noise, day and night, and the dirt and dust and disruption, for years.

Now he faces a new threat.  The developers RWE want to build an additional substation.  This one has nothing to do with the local wind-farm.  It’s part of the infrastructure for the new Triton Knoll off-shore wind “park” off Mablethorpe.  To connect to the National Grid, they need to bring cabling right the way down through Lincolnshire, past Boston, from Mablethorpe.  Thankfully the cabling will be (in the industry jargon) “undergrounded”.  A pity the turbines can’t be undergrounded too.  And the developers need a substation, and are looking at Bicker Fen — again — as a location.  But Mr. Bowler has had enough.

There are many reasons to oppose wind power, not least that it fails in its primary objective of cutting emissions.  But if we must have wind farms, surely the associated substations could at least be put in accessible locations, by major roads — not down long, narrow lanes, causing years of disruption for local residents.  One of Mr Bowler’s neighbours is a farmer, who was forced to do his harvesting at night because the volume of day-time traffic blocked access to his farm.

The planning consent for Bicker Fen imposed a series of conditions on the developer, including regular cleaning of mud from the road.  Local residents tell me that the developer made no attempt to fulfil these conditions.  Why not?  Because the local authority simply can’t afford the legal costs of enforcement — especially against developers grown fat on subsidies, who have almost unlimited funds to defend legal cases — and, as we know to our cost, to challenge planning decisions that go against them.

Even in their own terms, can the emissions savings planned (not delivered) for wind turbines ever cover the emissions involved in 350,000 vehicle movements, and shifting 120,000 tons of hard-core?  I doubt it.  But I shall be writing to RWE to see what their figures say.

8 Responses to An attack on the Lincolnshire countryside