The past is no guide to the future….

Posted on February 4, 2013 by rogeroffice 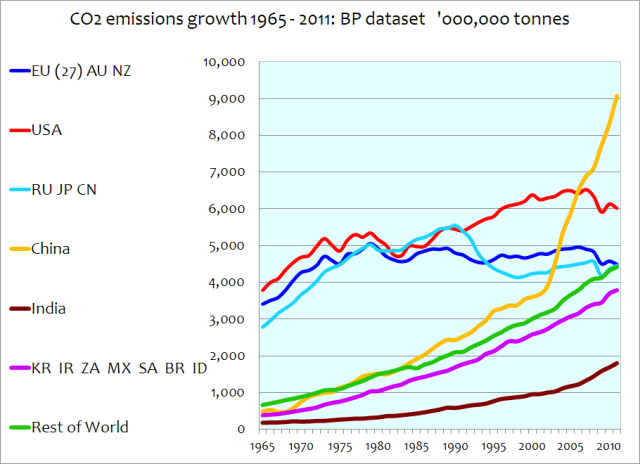 We are all familiar with that warning on financial products: “The past is not necessarily a guide to the future etc etc…”. That’s at least partly true. We can certainly learn lessons form the past, but the assumption that any past pattern will necessarily repeat itself is fraught with danger.

I’m afraid that we’ve made the same mistake in climate policy. We have a long-term thousand-year climate cycle, which gave us the Minoan Optimum, the Roman Optimum and the Mediaeval Warm Period, and which now seems to be giving us a new 21st Century Optimum. Superimposed on that, we have a thirty-year-or-so short cycle, which gave us the cooling in the 1970s (when scientists — including some of today’s Warmists — were predicting the on-set of the next ice-age). These trends came together in the ’90s to give quite marked warming up to 1998. This was the force that drove climate hysteria.

But there’s been no significant warming since 1998, as the Met Office has admitted. More than that, it’s revised its forecasts downwards and now expects no warming for the next five years. That’ll be two decades of stasis in global temperatures.

Of course no one expects a perfect correlation, but twenty years is stretching credulity to the limit. The ClimateGate e-mail leaks showed the “Hockey Team” (that small group of scientists who gave us the “Hockey Stick” graph, and has hi-jacked the IPCC process) sending each other anguished e-mails back in 2009 worrying why the real-world data failed to match their predictions. With the latest figures confirming flat-lining temperatures, they must be apoplectic.

The graph above shows CO2 emissions from 1965 to 2011, by major country groups. The USA has cut emissions (largely on the back of shale gas). But India, the BRICs and rest of the world are climbing steadily, while China rockets ahead.

So as they say in bad B-movies, “Get over it”. If you believe that rising atmospheric CO2 levels mean disaster, then prepare for disaster. There are 1200 new coal-fired power stations in the pipeline (including 25 in Germany). Whatever we do, emissions will continue to rise for the foreseeable future.

3 Responses to The past is no guide to the future….