Posted on February 5, 2013 by rogeroffice 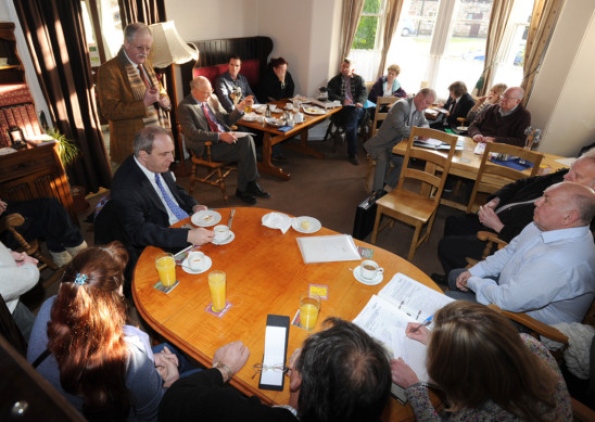 RH addresses the meeting at the Rose and Crown pub, in Thorney.

This is green vandalism at its worst.  Peterborough Council is proposing to take 900 acres of prime agricultural land around Thorney, Cambs, for a solar and wind farm.  In the process, they are giving notice to a number of tenant farms who have been farming the land, in some cases for decades.  These farmers are being given up to twelve months’ notice to quit, which in terms of the agricultural year is not very long.

The site is in the Eastern Region, a few miles east of my East Midlands patch, but I was there as UKIP energy spokesman at the invitation of my friend and colleague Stuart Agnew MEP (see picture)

They’re planning half a million solar panels and nine giant turbines, costing £331 million. That’s if it doesn’t run over budget.  This at a time when even government ministers, like John Hayes and Owen Paterson, are starting to see the folly of uneconomic renewables.

It’s also at a time when cereal prices are rising, food is becoming more expensive, and the world is facing the challenge of feeding a growing population.  It’s at a time when land is being taken out of food production for bio-fuels, and when the EU’s CAP reforms are putting more obstacles and “greening obligations” in the way of farmers, who just want to get on and grow crops.  The policy now is to generate expensive and intermittent electricity by taking food out of our mouths.  Some people call it environmentalism.  I call it vandalism and folly.

I understand that the land will be re-designated as industrial instead of agricultural.  So when the turbines and solar panels are broken and rusting (sooner than you think), it will be a brown-field site, and more of the best farmland in the country will be concreted over.

Even in their own terms, wind and solar power are hopelessly uneconomic.  The operators will make more money out of subsidies than they will by selling electricity.  They are using the land to harvest subsidies instead of cereals.

But of course the claims of the renewables industry don’t stand up to scrutiny.  They conveniently ignore the fact that intermittent generation requires fossil fuel back-up, run intermittently on a spinning-reserve basis, to fill in at short notice when the wind drops.  Run inefficiently, the back-up power stations use more fuel and create more emissions per unit of production than if they were run properly.  So the emissions savings claimed for wind and solar are largely offset by inefficiencies in the back-up generation.

This is gesture politics at its most counter-productive.  But let’s be sure to point the finger of blame where it’s deserved.  Yes, we can blame Peterborough Council for this destructive and insensitive project.  We can blame the government for the massive folly of its green targets and its Climate Change Act. But the prime culprit is (you guessed it) the European Union, with its 2009 Climate & Energy Package. No one else in the world is taking such an extreme approach to the issue, and the EU, which represents only 13% of global emissions, will therefore make effectively no difference to CO2 emissions.  What it will do is to undermine economic competitiveness, drive energy-intensive businesses offshore, force households and pensioners into fuel poverty, and bankrupt our grandchildren.  It is economic suicide.  That’s why I’m supporting the Affordable Energy Initiative www.affordable-energy.eu.

One further point: while wind turbines are unlikely to see major increases in efficiency, solar PV may well improve dramatically, for example with the thin-film solar PV technology currently in development, which could be applied to south-facing windows in large buildings without devastating agricultural land.  It may be that solar could make sense in ten years’ time, despite the back-up problems.  Then we shall look back ruefully and wonder why we wasted billions on technology which by 2020 will be obsolescent, redundant and hopelessly uneconomic.  We shall wonder why we didn’t have the sense to spend a little more on R&D instead of billions on old-fashioned solar panels.

14 Responses to Harvesting subsidies, not cereals