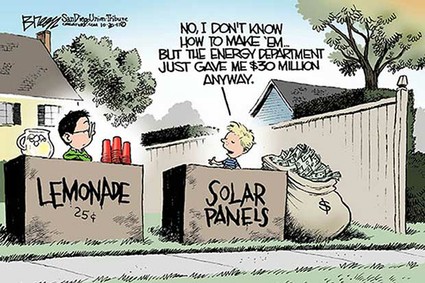 I have been arguing for a long time that EU energy policy is a disaster for competitiveness.  It is driving up energy costs, forcing industries, and investment, and jobs out of the EU altogether.  And at the same time, it is leaving millions of households and pensioners in fuel poverty, many forced to choose between eating and heating.  And after all that, it is not clear that it is having any impact at all on emissions.  Indeed it may, perversely, increase them, by forcing industry out to other jurisdictions with lower environmental standards.  I understand that a ton of steel made in China results in twice the emissions as the same ton of steel made in Europe.

I’ve been puzzled by the fact that industry generally has been very slow to make the case on energy costs.  I’ve had some large energy users worrying privately about power costs, but most large companies seem to be intimidated by Big Green, and daren’t voice their concerns.  Marks & Spencers lorries carry that absurd slogan “Plan A.  Because there is no Plan B”.  Yes there is a Plan B, Mr. Marks.  Plan B is, don’t do Plan A.

Now, however, BusinessEurope, one of the major European industrial lobby groups, has put its head over the parapet and told Mr. José Manuel Barroso in no uncertain terms that it’s time to stop focussing on climate mitigation, and to concentrate instead on competitiveness and security of supply: And about time too.  As the Good Book says, “There is joy in Heaven over one sinner that repenteth”.  At last, we have a tentative outbreak of common sense.

But what about the European parliament, that bastion of green orthodoxy that can be relied on to support climate alarmism through thick and thin?  There are signs of a breach in the dyke, and the little Dutch Boy’s finger may no longer suffice to stem the tide.  I wrote recently about the parliament’s vote on the Commission’s ETS back-loading proposal, which the parliament rejected — for once putting jobs and competitiveness ahead of climate policy.

And earlier this week, we had another small but surprising — and very encouraging — development.  An amendment mildly critical of wind turbines and solar panels was passed, albeit by a tight margin.  By 337 votes to 324. in a report on Renewable Energy, the following amendment was passed: “39. Points out that, in some regions, especially small communities and islands, the deployment of windmills and photovoltaic panels has met with public opposition; points out that windmills and photovoltaic panels are perceived to have an adverse effect on tourist industries and on the nature and form of countryside/island landscapes”.

That’s right.  The European parliament recognised, for the first time, the downsides of renewables, at least in terms of landscape and visual intrusion.  I can’t call it a breakthrough or a sea-change, but it’s certainly tip-toeing in the right direction.