The politics of shale gas 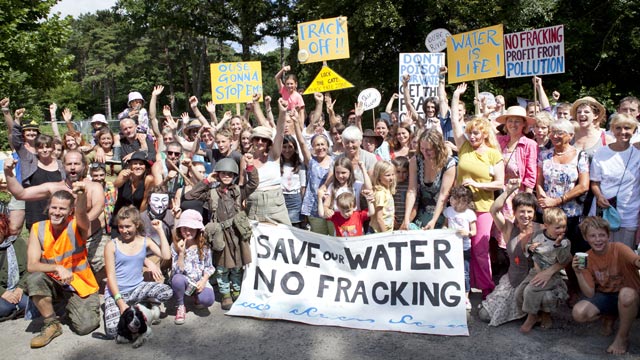 Now that the dust is hopefully starting to settle on the Balcombe protest, it is worth thinking through the political implications of shale gas.  I must admit that I was concerned earlier that a widespread anti-fracking movement across the country could be a real problem for UKIP, given that we have taken a clear position in favour of shale gas.

I have written before about the danger of characterising UKIP as “against everything”, as a universal party of protest, as reliably contrarian.  Yes, we’re against EU membership, and mass immigration, and wind farms, and HS2.  But we’re in favour of freedom and independence and democracy, and grammar schools, and prosperity.  And affordable energy.

People ask me how we can be against wind farms but in favour of shale gas.  Easy answer: wind farms are a non-solution to a non-problem.  They don’t deliver, even in their own terms, and they’re doing massive economic damage.  Gas, on the other hand, is a vital part of our energy mix, and the promise of indigenous gas resources is a huge opportunity.  It potentially means jobs, growth, prosperity, energy security, lower prices.

I am tired of hearing people say “The energy companies make huge profits — they’ll never pass on reduced costs”.  Check the numbers.  Energy companies often make high absolute profits, because they’re large businesses.  But in terms of margin on sales, and return on capital, they are very comparable to other large companies.  In any case, we simply won’t know for sure about the economics of shale gas in the UK until we’ve done a lot more drilling.  But the US experience strongly suggests that shale gas means lower prices.  And more supply almost always does mean lower prices.  That’s basic economics.

But in the early days of Balcombe, I felt a frisson of concern.  If opposition to fracking was indeed widespread, would it damage UKIP’s electoral prospects in 2014 or 2015?  Worse still, would it give a boost to the Greens, who despite the antics of Caroline Lucas at Balcombe are nowhere in the polls?  But having followed the media coverage over the last couple of weeks, I feel reassured.  I suspect that the truth is getting through to the public — that the risks have been exaggerated out of all proportion, while the economic benefits are just starting to be understood.

First there was the opinion study from Nottingham University, showing a small but significant increase in support for shale gas. Next, Matt Ridley’s magisterial hatchet job on what he called “The five myths of fracking”.

Do read it, if you haven’t seen it yet.  Then the Church of England (which I often criticise, but they had it right this time).  They said that fracking protesters were “like MMR scaremongers”. A very apt simile.  In both cases, those peddling wholly unjustified fears risk huge damage to their fellow citizens.

Not only has fracking been happening safely in the USA and Germany, but there are even fracking sites in the UK.  At Wytch Farm near Poole, for example. Or at Beckingham in Nottinghamshire, where they’ve been fracking since 1963. With splendid irony, the Beckingham site is very close to the RSPB’s nature reserve at Beckingham marshes.  One wonders whether the RSPB realised this when they recently (and unhelpfully) called for further economic impact assessments on fracking.  Very apt that the RSPB should have egg on its face.

In recent days there has been increasing emphasis on the potential of shale gas to alleviate fuel poverty and to help to deliver affordable energy.  When the Church of England issued its “MMR scaremongers” statement, it also drew attention to those in fuel poverty, and to our moral duty to try where possible to deliver lower prices.  Now Derek Lickorish, Chairman of the Fuel Poverty Advisory Group,  has added his voice to the debate, arguing that shale gas has the potential to mitigate fuel poverty, and urging that we should exploit it.

Sometimes, doing the right thing in politics can cost votes.  In this case, however, I don’t think that UKIP will suffer electorally for its support of shale gas (subject, of course, to proper regulation and safeguards).  After all, Caroline Lucas wasn’t going to vote for us anyway.

24 Responses to The politics of shale gas