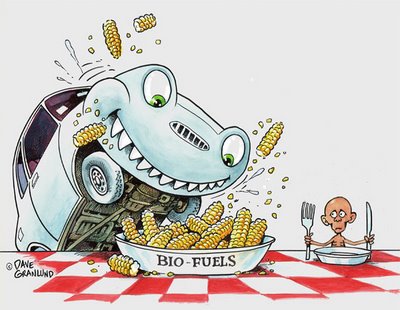 Bio-fuels were once regarded as a major contributor in “fighting climate change” and cutting emissions.  Then several problems were recognised.

First, there is a considerable energy input in growing bio-fuel crops.  Diesel for tractors, fertilisers and pesticides.  This must be off-set against the supposed emissions savings.

Second, burning food crops reduces the tonnage of food available to feed people, at a time when hunger remains a global problem.  It also raises food prices.  There have been riots over food prices in a number of countries.  The extent to which bio-fuels raise prices is disputed, but clearly they must have a significant effect.

Thirdly there is the question of “Indirect Land Use Change” or ILUC.  If people use agricultural land for bio-fuels, this will put further pressure on other land.  It may cause the clearing of rain-forest or other forests, or the use of peat-lands.  The extent to which this occurs and its impact on emissions is dependent on the type of crop involved, the type of land brought into cultivation, and the extent to which new land is required.  It too is debated, but it is recognised that ILUC further discounts the emissions savings envisaged by the biofuels business.

The EU was proposing to mandate 10% biofuels in automotive petrol and diesel, but following the ILUC debate it now proposes to cut this figure to 5%.  This is a blow to companies that have invested in bio-fuel capacity — and regulatory uncertainty is a major problem across the energy spectrum.

It is expected that “next generation” biofuels will come on stream using agricultural waste products rather than food crops.  Straw, for example.

UKIP’s position is as follows.  We think that bio-fuels are unnecessary and that “the fight against climate change” and against fossil fuels has had its day.  We believe it is irresponsible to burn good food, or to use good agricultural land for bio-fuels (or indeed for solar panels).  Accordingly, given the choice in this legislation between lowering the 10% target and not lowering it, we want it lower.  We recognise that the NFU opposes this position, but we believe that the interests of the energy market and the economy generally (as well as the need to feed the world) outweigh the sectional interests of some farmers.

At the same time we draw attention to the industrial/economic damage that EU regulation is doing by constantly changing the goal-posts for industry, as in this case.  We see regulatory uncertainty as a major threat to the energy market.  And we also urge the industry not to base a business plan solely on subsidy or regulation, since both can be dramatically altered at the stroke of a pen.

12 Responses to THE ILUC VOTE