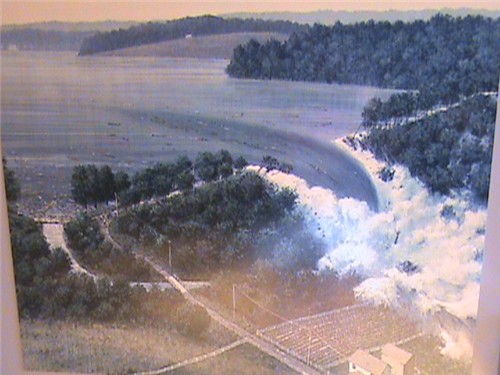 A dam can look like a wonderfully solid piece of civil engineering.  It stands for decades, seemingly immoveable.  Maybe just occasionally a little trickle of water.  But then one day, without warning, great chunks and slabs of earth and concrete start shifting.  The process rapidly accelerates until we see a catastrophic collapse and a vast wall of water descending on the unsuspecting towns and villages below.  (This is not – but could be – a comment on the dangers of hydro-power, as at Banqiao in China in 1975, when 171,000 died)

So it is with climate and energy policy.  Some of us have been arguing against the folly of climate mitigation for years, and we have been roundly condemned and vilified.  Some of our opponents have even called for a new round of “Nuremberg Trials for climate deniers” (not that I have ever denied the existence of the climate – or that it changes).  But essentially we were ignored.  Energy prices went up.  Families and pensioners were forced into fuel poverty.  Businesses relocated.  Investment and jobs went elsewhere.  Yet the small emissions savings we made (or didn’t make) in Europe were swamped by the rapid increase in coal-fired generation elsewhere.  There are currently 1200 new coal-fired power stations in the global pipeline.  Yet mean global temperatures have now shown no significant increase for nearly two decades.

Then in the last few days, some of those slabs of concrete and earth started to slip.  No less than the EU’s Energy Commissioner Günther Oettinger announced that we could not continue to pursue a unilateral energy policy that was undermining competitiveness.  This is the man who was suggesting only six months ago that “Scotland could become the energy power-house of Europe” with its wind farms.

And Günther was not alone.  In what appears to have been a coordinated One-Two, Industry Commissioner Antonio Tajani became even more apocalyptic.  Europe faced an “industrial massacre” unless we had an energy policy re-think. Well yes, Antonio.  What took you so long to notice?  And the same press report makes it clear that European Council President Rumpy Pumpy (so many Presidents in the EU!) had said much the same thing.  This is not a single maverick voice.  This is an organised change of tone.

And it’s not just in Brussels.  Back in the UK, MPs are starting to question the 2008 Climate Change Act, and its dire impact on both families and industrial competitiveness. Again, what took them so long?  When it was voted through, they were almost unanimous in supporting it, and proudly burnishing their green credentials.  Now, they see the results of their folly.

They can have no excuse.  For years, Christopher Booker (another of the lone voices) has been pointing out that they had no idea what they had done. Booker doesn’t tend to quote Holy Writ, but the phrase “Forgive them, for they know not what they do” springs to mind.  And yet they should have known.  What right had they to sign away a trillion pounds of our money on a useless and futile vanity project, without even pausing to count the cost?

It would be nice to think that these Commissioners, and MPs, had finally listened to UKIP, and realised that we’d got it right:  I hope and believe that we have played a worthy part in taking the debate forward, but in the end I suspect it has been pressure from industry that has forced their hands.  They’ll hate it, of course.  So much egg on their faces.  Squeals of anguish from the Greens.  But it has to be done if Europe is to survive and recover.

Which brings us to the $64 billion question.  What will we actually do?  When will we repeal the EU’s climate targets, scrap the ETS, get on with shale gas, renounce the Climate and Energy package, withdraw renewables subsidies, build new coal and gas capacity, and so on?  (At least wind turbines have a good scrap value, with all those rare earths).  I issued a press release calling on Ed Davey to tell us whether he agrees with the new views of those EU Commissioners.  Or while he’s way down a very deep hole, will he just keep on digging?  I’m still waiting for an answer.