What did the Party Conferences say about energy?

Posted on October 3, 2013 by rogeroffice 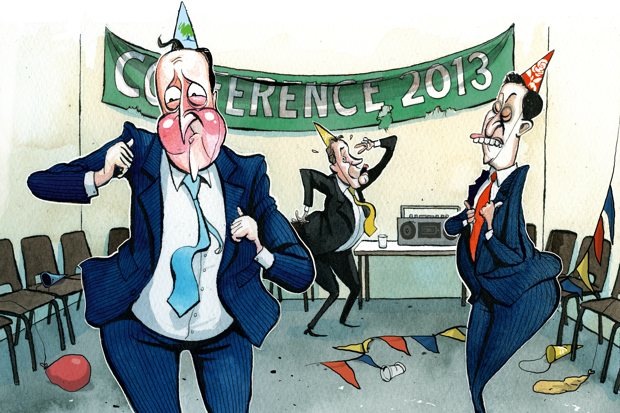 So the Party Conference season is over. The politicians and the lobbyists (and the few die-hard party members) have gone home. A great number of promises have been made. Call me a cynic if you will, but I expect that few will be kept.

As UKIP’s Spokesman on Energy, I was naturally interested to hear what was said on energy issues. Ofgem says we face an increasing risk of blackouts. The government is in protracted negotiations over new nuclear capacity, but we still wait for action. We are closing down perfectly good coal-fired power stations at the behest of Brussels. Meantime the government has created so many confused rules and tariffs and subsidies, and so much regulatory uncertainty, that not surprisingly energy companies are reluctant to start investing at all.

Huge questions loom over renewables. After the latest IPCC report, which seems to be almost a caricature of itself, should we still worry about climate change? Given the rate at which developing countries are building coal-fired power stations, can anything we do mitigate the increase in atmospheric CO2? And do wind turbines actually reduce emissions anyway? (Answer: No, No and No).

And how do we face up to the problem of energy prices, for households and industry? I presented UKIP’s answer at our conference. We would scrap renewables subsidies on new renewable projects. We would focus on proven technologies like coal, gas and nuclear. Moreover we would support exploratory drilling for shale gas. In the USA, shale gas has led to massive energy price reductions, driving new jobs and growth and industrial regeneration. Shale gas is potentially the biggest economic and industrial opportunity this country has had since the North Sea a generation ago.

The Conservatives have hitched up their skirts and flashed a bit of ankle. Cameron says he “will not maintain renewables subsidies longer than absolutely necessary”. But they’re not necessary now, Dave. They’re driving up prices and failing to deliver. Business Minister Michael Fallon says we can’t continue to allow green policies to drive up prices. But he doesn’t tell us his alternative plan, nor how he’s going to get a new policy past decision-makers in Brussels (or even past his Lib-Dem partners).

The Lib Dems themselves sat firmly on the fence. They accept “a limited rôle for nuclear power in a safe and affordable way”, and they would accept fracking “in a controlled way” (how else would it be done, for heaven’s sake?), and subject of course to tighter regulation. But they have no grand plan to address energy pricing and energy security.

Meantime Labour’s Ed Miliband wants a 20-month price cap on energy. Right problem, Ed. Wrong solution. They tried price caps in the USSR, and they resulted in empty shelves, supply shortages, bread lines, black markets, poverty and misery. This is a move back to old-fashioned state socialism which will have potential investors running a mile. And it will probably increase prices, as suppliers seek to pre-empt the freeze. If Ed’s purpose was to sabotage any rational investment strategy in energy infrastructure, he could hardly have done better.

And Labour want “the total decarbonisation of the power sector by 2030”. This is fantasy-land. They may as well pass a resolution affirming the importance of the Tooth Fairy. But the threat of such a policy will only add to the disincentives for investment.

The rower James Cracknell, now a Tory MEP hopeful, says that “UKIP has just one policy – leaving Europe”. I hate to mention it, James, but we’re also the only British political party with a rational energy policy.

9 Responses to What did the Party Conferences say about energy?