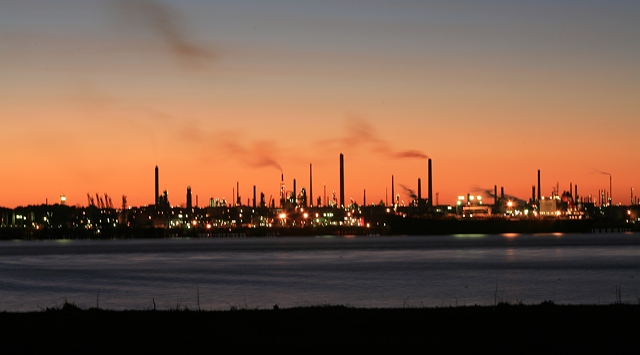 The oil refinery at Fawley, Hampshire

Yesterday I attended a presentation in Strasbourg on the state of the refinery industry in Europe, delivered by a major player in European Refining. It raised some major issues, and confronted MEPs with the very serious consequences of some of their decisions.  I like refineries: I have an atavistic recollection of the oil refinery at Fawley in Hampshire (pictured).  As a child, I lived in Southampton, and I well recall many times visiting the New Forest and seeing the flare-off flames at the Fawley refinery.

For a long time now, I’ve been repeating a mantra with which regular readers will be all too familiar: “High energy prices are driving energy intensive businesses out of the EU altogether, taking their jobs, their investments and their tax revenues with them”.

When I repeat this phrase, I’m thinking of metals, paper and pulp, glass, chemicals, cement – the usual list of energy-intensive businesses.  It’s easy to forget that the refining of crude oil into petrol, diesel and so on is itself an energy intensive business, and one which is under immediate threat in the EU.  To be fair, I was already broadly aware of this.   Back in March this year I attended a presentation from the European Refinery Industry Association where we heard that UK refineries operate on a margin of less than 2p a litre, and that their profitability was about to be wiped out by the EU’s Fuel Quality Directive. But last night’s presentation brought the issue cogently back into focus.

Across the EU, the refinery industry employs around 100,000 people, and more than 24 million jobs are under threat in energy intensive industries. Today refinery industry pays taxes of €279 billion.  The corresponding figures for the UK are seven major refineries, paying £195 million in corporation tax. Direct and indirect employment is estimated at 26,400 jobs. Already in recent years we’ve seen 15 refineries closed in the EU, and more than 10 others are actually under threat of closure. There is also the refinery at the Ineos site in Grangemouth, Scotland, which came within an ace of closing recently and was only saved at the eleventh hour by the promise of cheap shale gas from the USA, which enabled the whole site to remain viable.

So what’s at risk here is jobs, GDP, security of supply, tax revenues.  And the reason?  Quite simply, that over-regulation, plus very high energy prices, have made the EU (and the UK) extremely unattractive places to do this business.   It is actually cheaper to import ready-processed petrol and diesel from the USA, or India, or various other sources, than it is to refine it in the UK.

We risk applying such extreme environmental and other standards in Europe, and such high energy costs, that it is simply cheaper to import than to produce under EU rules.  It’s a telling statistic that while within the EU we produce only 12 to 13% of global emissions, we are actually responsible for around 25% of global emissions when you factor in the emissions from products made elsewhere but imported to the EU.  Already half the emissions for which EU citizens are responsible occur outside the EU.  And we’re busy driving more abroad.

The net result of EU energy policy (and over-regulation) is (A) we are doing vast damage to the European economy; and (B) at the same time, we are failing to reduce emissions (which was our declared objective), and indeed we are very likely increasing them.  It’s time to stop this folly.

25 Responses to Refining in Europe? It’s cheaper to import.