Posted on February 9, 2014 by rogeroffice 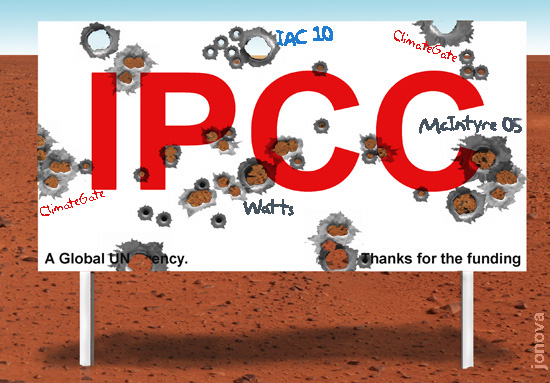 In its Third Assessment Report, 2001, the IPCC stated: “In sum, a strategy must recognise what is possible. In climate research and modelling, we should recognise that we are dealing with a coupled non-linear chaotic system, and therefore that the long-term prediction of future climate states is not possible.”  My emphasis.  IPCC’s Working Group I: The Scientific Basis, Third Assessment Report (TAR), Chapter 14 (final para., 14.2.2.2), p774, if you want to check it out. And I agree with that statement.

There we have it in black and white.  The nature of the climate is such that we cannot make long-term predictions.  Note that this is not simply an absence of data, so that perhaps we could hope that by 2014 we should have filled the gaps and learned how to make long-term forecasts.  No.  It says that because of the very nature of complex, non-linear systems, it is impossible, in theory and in practice, to make such predictions.

Occasionally readers of my blog ask me (and you can almost hear the sarcasm in their voices), “So where did you get your degree in climate science, then?”.  Of course I don’t have a degree in climate science.  I always used to say that I was merely a businessman who was trying to knock some sense into Brussels heads.  But after fifteen years in the European parliament, I guess I have to admit that I’m a politician, and it’s the job of politicians to make decisions on behalf of their constituents on subjects in which neither the politicians nor the constituents may be expert.  So I have considered it my task and duty, on the climate question, to familiarise myself with the debate, and to make a judgement.  Too many politicians just accept the current paradigm without question – even when the current paradigm is looking suspect, with no further global warming this century.

Nor should we ignore other scientists outside the esoteric field of climate science (bear in mind that climate science is fuelled by massive sums of money, while many other specialities are not).  It took a statistician to debunk Michael Mann’s famous “Hockey Stick Graph”.  It is astronomers who are leading the way in pointing to the relative importance of solar cycles, largely ignored or dismissed by the IPCC.

It’s easy to accept the orthodoxy.  I suggest it takes a certain level of courage to take a different view, and then to shout aloud that the Emperor Has No Clothes.  And while I have no degree in climate science, I do have a degree in mathematics (Cambridge, 1965).  So I have a general understanding of chaos theory – the study of coupled, complex and non-linear systems.  I know what the IPCC was saying in the quote above.  And I agree with it.  (As a rhetorical flourish, I have been putting the same idea into demotic language for years: “How can they tell us what the climate will be doing in 2100 when they can’t tell us if it will rain on Tuesday?”).  It’s worth noting that this IPCC point was dropped from subsequent reports.

So the quote begs the question: If the IPCC agrees that we can’t make long-term climate forecasts, why have we been spending – arguably wasting – hundreds of billions of dollars on mitigating a problem we can’t predict?  And (I would add) spending that money on projects which will not even succeed in their own terms?  They will not significantly affect atmospheric CO2 levels, and (as Bjørn Lomborg has shown) will not significantly affect the development of climate change, even if Al Gore and James Hansen are right about CO2.

I’m indebted to Fritz Vahrenholt and his book “The Neglected Sun” for the IPCC reference.  Please do read this book, if you have even a remote interest in the climate question.  Amongst other things, he covers the extraordinary level to which a small group of scientists, all singing off the same hymn-sheet, have managed to hi-jack the IPCC process and to become lead authors on its reports (ably supported by zealots from Greenpeace and WWF).  The idea that the IPCC represents a consensus of serious scientists is increasingly absurd.  Vahrenholt also draws attention to the tendency of climate scientists and activists, including German’s WBGU to demand that democracy itself should be abandoned to save the planet.  They recognise, probably rightly, that when voters understand the massive economic sacrifices they’ll be asked to make, and the restrictions on their day-to-day lives and personal mobility, they’ll vote against it.  So (say the Warmists) don’t let them vote..

Fritz also looks at what he sees (probably rightly) as the two key errors of the IPCC.  First, it uses grossly inflated estimates for the sensitivity of climate to atmospheric CO2 – typically around 3oC per doubling, when the real figure is probably less than half that.  And second, it simply ignores the mass of evidence linking climate to a range of solar cycles of different lengths.  It seems bizarre that the IPCC makes much of an apparent correlation between temperature and CO2 over thirty years, but ignores much deeper solar correlations that can be tracked over thousands of years.

He then goes on to create indicative forecasts of the trend of global temperatures over the next century, using a realistic sensitivity estimate, and adjusting for solar effects.  He sees a small decline in global mean temperatures by 2035.  And taking one of the IPCC’s mid-range forecasts for emissions, he sees an increase of just over 1oC by 2100.  So even if you are concerned about CO2, we have many decades of grace before we need to worry.  And that “Under 2oC” limit that world leaders love to talk about?  There’s no realistic danger of getting anywhere near it before the fossil fuels run out