This is the view of the Union of Concerned Scientists, a lobby group, onthe imagined “scientific consensus” that most of the global warming since 1950 was manmade:

This, however, is what the published, peer-reviewed science actually shows:

Over and over again, we hear that “97% of scientists endorse global warming theory”. This number has been around for some time.  It’s almost as though there’s a Green Propaganda Control Centre somewhere, with “97%” written into the Mission Statement, and every study designed to confirm it.

The most recent example is an article published in The Guardian on 6 January 2013 by the accident-prone John Abraham and the paid propagandist Dana Nuccitelli, which repeats the “97%” claim over and over again, as though mere repetition will somehow make it true.

Yet a detailed examination of the studies on which it is based fails to support the claim. Nuccitelli was a co-author of a paper, Quantifying the Consensus, published in the propaganda journal Environmental Research Letters in April 2013.

Nuccitelli adopts the IPCC’s definition of “scientific consensus”, that “human activity is the very likely causing most of the current Global Warming” (my emphasis).  Yet in his analysis of 11,944 peer-reviewed papers he also adopts a much broader definition.  In fact, he and his co-authors established seven or eight categories of endorsement of the consensus. But only the authors’ first category explicitly reflects the official consensus that humans are the primary cause of global warming.

In that category, the authors marked just 64 papers out of 11,944 as endorsing the official consensus.That’s not 97%.It’s just half of one per cent.

The numbers are as follows:

These figures are not surprising.Many scientific papers in the climate area deal with fairly arcane, detailed and specialist areas that may have little to say about the broader question of manmade global warming, and are therefore rather likely to fall into the “No Opinion” category of this analysis.

I am not entirely clear where Mr.Nuccitelli gets his 97% “consensus”.None of his numbers seems to add up to 97%.  But the conclusions from these almost 12,000 papers is that the great majority (7930, or 66%) reach no conclusion at all on our contribution to global warming, and most of the rest are prepared to nod to the current orthodoxy, but don’t make a big deal of it.

The fact is that most of the published peer-reviewed papers expressed no view at all.  The “97% consensus” figure is an engineered piece of green propaganda, not a scientific consensus. Not that science is done by pusillanimous headcount anyway.

The 97% figure reminds me of another well-worn but totally specious claim that “3½ million British jobs depend on British Membership of the EU”.  This is another figure which has been absorbed into the media orthodoxy and is constantly repeated.  Based on a flawed study more than ten years ago by NIESR, this interpretation was angrily rejected by their Chief Executive within 24 hours – yet it is still trotted out by Brussels apologists today.  Sometimes falsehood seems indestructible.

In central England, where we have been keeping a regional temperature record since 1659, a record which faithfully tracks global temperature change to the nearest hundredth of a degree over the past 120 years, there has been no global warming for 25 full calendar years. A quarter of a century. And have you heard that surely not uninteresting fact in any mainstream news medium? The answer, of course, is No. 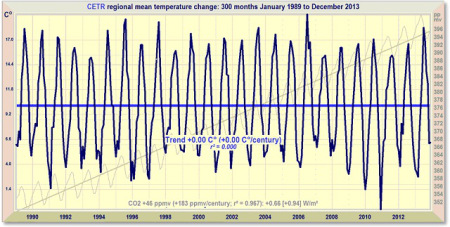 CO2 continues to rise at a record rate. But, for a quarter of a century, there has been not a flicker of temperature increase. It has not happened. So if anyone tries to tell you this year’s floods were caused by global warming, just show them this graph.

54 Responses to ‘Consensus’? What ‘consensus’?