A big Thank You to UKIP activists 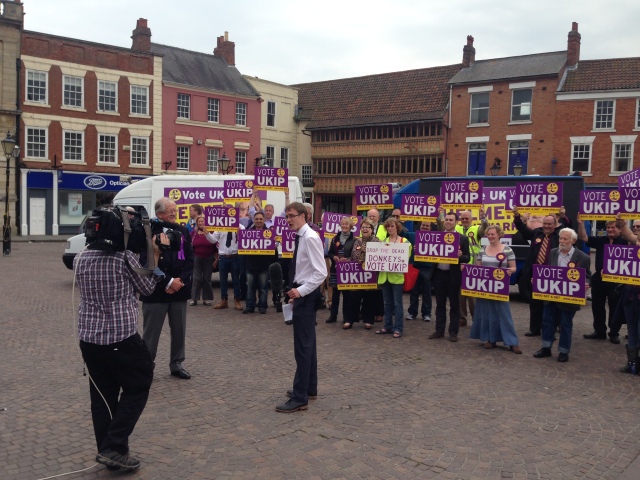 Now that the dust has had time to settle, it’s time to thank all those UKIP activists who came to Newark in their hundreds.  The best day was probably May 31st — the day of the great pre-election rally in Kelham Hall — when we had 300 out door-knocking.  They came from across the East Midlands, but also from further afield.  From the South East, the West Country, East Anglia, the North, from Scotland, Wales and Northern Ireland.

They achieved extraordinary things.  In a series of bottom-up initiatives — which our campaign knew nothing about until they happened — vehicles in UKIP livery turned up on a daily basis.  Many had been made specific to the Newark campaign.  On the first day we had a purple caravan “The Return of Common Sense” parked in Newark’s beautiful Market Square.  Then no fewer than three large vans, professionally decorated with “Helmer for Newark” slogans and six-foot high mug-shots arrived, dominating the view in the square.

A couple of days later, we were heading south to Bingham and had just left the main A46.  We were separated from the main road by a field.  And we were astonished to see a fire engine — yes, a fire engine — with massive UKIP signage, heading north to Newark.  Finally, a Smart Car entirely enveloped in UKIP signage appeared in the market square, and sat on an official market stand for the day.  Wonderful.

In addition to all these free-lance vehicles, we also had the official ad-vans with ads covering wind-farms, the Newark hospital and local jobs.

Despite the biggest turnout ever in a UKIP by-election campaign, we were of course heavily outnumbered by the Tories, who claimed to have (and may well have had) a thousand at times.  But whereas ours were there voluntarily, because they believed in what we are doing, most of the Tories were whipped — the payroll army.  The Prime Minister asked each of his MPs to spend three days in Newark.  With 305 Tory MPs, that’s 915 man-days.  Ministers were there constantly.  Hague, Gove, Osborne, Paterson (making pork-barrel promises about funding for flood prevention — pity they didn’t do it long ago.  They’ve had a Tory MP for long enough).  And of course the Prime Minister attending a by-election for an unprecedented four times.

Of course the Tories also had more infrastructure on the ground.  They had no doubt done a full canvass of the constituency, so they knew where their supporters were, and had the capacity to run a full “get the vote out” operation on the day.  Our local branch, led by Chairman Peter Weston Davies, did a sterling job, but just didn’t have the numbers and capacity to match the Tory effort.

And the Tories spent and spent.  Channel Four’s Michael Crick — no friend of UKIP (he’s the one that Godders hit over the head with a rolled-up conference programme) has suggested that they may have over-spent the statutory limit of £100,000 by up to 150%.  We shall be looking at their expenses returns with great interest.

And in the end, they won.  This is the first time I’ve ever stood for public office without winning.  The press demanded to know “if we were disappointed by the result?”.  Well of course we ran hoping to win, and working to win — and certainly coming first is better than coming second.  Nevertheless, we achieved a remarkable result.  We increased our share of the vote six-fold from the General Election, and we halved the Tory majority, cutting it by 8000.  Any Tory MP with a smaller majority than that had better watch out.   So yes — I’m sorry we didn’t make the Westminster break-through this time, but I believe that the result — in the face of such massive Tory fire-power — was creditable and encouraging.

Bear in mind that the Conservatives can put together that sort of campaign for a single by-election.  But next year they’ll be fighting 600+ seats and a couple of dozen UKIP target seats, and they just won’t be able to match that kind of effort.  Let’s see how they fare on a more level playing-field.  The Prime Minister can’t make four visits to each of 600+ constituencies.

One amusing feature was the way the Tory candidate, 32-year-old Robert Jenrick — variously described as “A posh Tory boy” and a “London Property millionaire” (he has a £5m+ property portfolio) — was hidden from the press in the final days of the campaign.  On the morning of May 31st, he and I were scheduled to appear together on LBC.  I appeared.  Jenrick was nowhere to be found.  Not answering his phone.  On the Monday we were scheduled to appear successively on the BBC News Channel, filming in the Market Square, but Jenrick was withdrawn by his agent, apparently intimidated by the UKIP signage on the parked trucks.  After that, he was not seen at all, and the press pack sat around in Starbucks crying into their coffee and wondering why they couldn’t find him.

So let me take this opportunity to thank everyone who was involved in the UKIP campaign.  It was superbly organised by Paul Oakden (who took a month’s leave from his day job as my Regional Coordinator, to work on the campaign). There was enormous support and enthusiasm.  There were new members joining the Party — and existing members writing cheques.  There were the amazing free-lance contributions in terms of vehicles, arriving without the knowledge of the campaign, but beautifully and professionally conceived.  We may not have won the seat, but many UKIP veterans thought it was as good a by-election campaign as we’ve sever done.  And given a decent result in the face of everything the Tories could throw at it, we can take great encouragement for 2015.

23 Responses to A big Thank You to UKIP activists