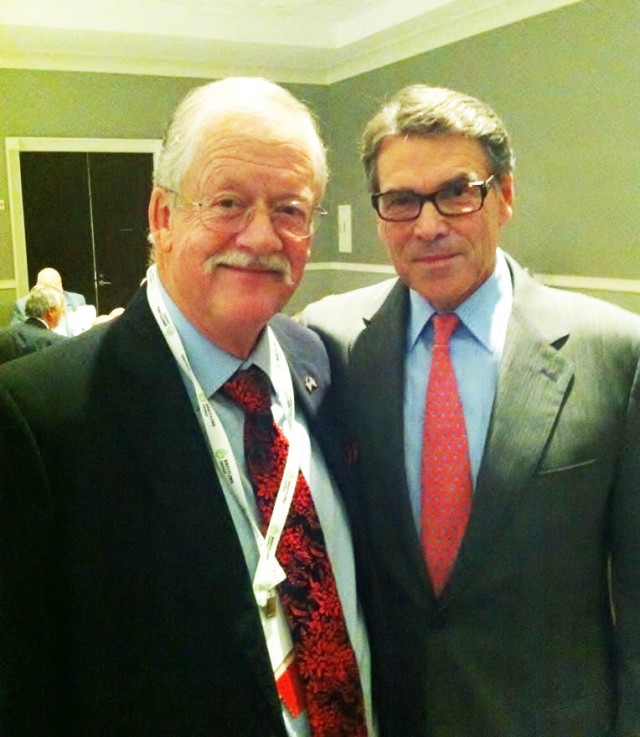 While in Dallas last week at the ALEC Conference, I had the pleasure and privilege of meeting Texas Governor and 2012 Presidential candidate Rick Perry.  I Tweeted the photograph, only to be greeted by a barrage of complaints about the Governor’s traditional views on social issues.  I personally have no problems with Governor Perry’s position on social issues (some but not all of which I share).  But I am much more interested in his attitude to economic policy — his commitment to low taxes and free markets — which is having dramatic and positive effects on the economy of his State and on the prosperity of his voters.

This was perhaps best illustrated at a presentation given at a plenary lunch event (ALEC has close to 2000 members, so such lunches are substantial events) by the Chief Economist of The Heritage Foundation, Stephen Moore.  A former member of the Wall Street Journal editorial board, he is a man who knows whereof he speaks. His speech is just half an hour long, and if you’re interested in classical liberal economics, it’s a half an hour well spent.

One of the great features of the American system (and of great interest to ALEC) is that the federal structure allows for wide policy variations between states, which in turn offers opportunities to test alternative approaches side-by-side.  This contrasts with the centralised, Napoleonic approach in Brussels, where the énarques and the technocrats use their superior intellects to come up with idealistic solutions, which can then be applied wholesale to the EU member-states, offering little opportunity for pragmatic comparisons.

Of course sometimes the Napoleonic approach starts to crack at the edges, and reality shows through.  They didn’t manage to get all EU states into the reckless €uro experiment, and it’s noteworthy that European states outside the EU (Switzerland, Norway) seem to do better in terms of GDP and employment than EU states, while non-€uro EU states do better than the €urozone (and Southern Europe goes into melt-down).  But I digress.

Moore pointed out that two recent Presidents, Reagan and Obama, each assumed office during a very serious economic crisis.  Reagan approached his problems with lower taxes, lower government spending and a deregulation drive.  He took the rocks off the lawn, and allowed the grass to grow.  Obama, on the other hand, piled on more rocks.  Higher taxes.  A series of economic interventions.  Socialised medicine.  Moore contrasted the five-year post-crisis growth rates under the two scenarios, and concluded that the USA today would be $2 trillion (two million million) better off in GDP terms under the Reagan policy prescription.

You can argue that other factors may have affected events nearly thirty years apart.  But Moore made a similar case based on the contemporaneous performance of “Growth States versus Declining States”.  Texas has enjoyed three times the job growth of California, while Florida has five times the job growth of New York.  Texas and Florida have zero state income tax.  California and New York have 13%.  Unlucky for some.

There is a great migration of jobs, people and investment from high-tax states to low-tax states — or, in broad terms, from the North East to the South.

One of the greatest problems in the presentation of economic and fiscal policy today is to make the case for lower taxes, especially lower taxes on the wealthy.  It’s so easy for Labour (in the UK) to talk about “hand-outs for the rich” (as though confiscating a bit less amounts to a “hand-out”).  So I was particularly struck by Stephen Moore’s graph plotting the maximum US income tax rate over time against the share of tax revenue paid by the wealthy.  The result is stunningly counter-intuitive.  As top tax rates go down, so the share of tax paid by the wealthy goes up,dramatically and decisively.  Punitive taxes on wealth may hurt the rich, but they also punish the poor.  They cost jobs and growth.

Towards the end of his presentation, Moore came up with a killer quote.  “In short, it is a paradoxical truth that tax rates are too high today and tax revenues are too low, and the soundest way to raise the revenues in the long run is to cut the rates now”.  Well you’d expect that from a right-wing, Chicago School political ideologue, wouldn’t you?  Except that this wasn’t a right-wing ideologue.  This was Democrat president John Fitzgerald Kennedy , speaking at the Economic Club of New York on December 14th 1962 That’s it.  A Democrat.  But at least a Democrat who understood something about economics and taxation.