The Tories and Big Bertha 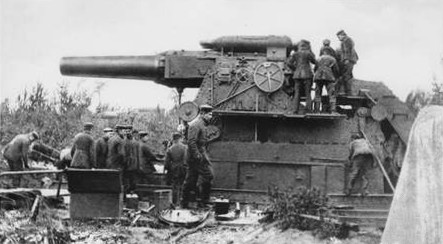 Before the First World War, the Germans developed an exceptionally large artillery piece which was generally known as “Big Bertha” — the name widely regarded as an unkind reference to Bertha Krupp, heiress and owner of the Krupp industrial empire, which built the weapon.

The gun was not hugely successful, and only a handful were built.

The Tory Party has its own artillery piece, a much more devastating device than the century-old German weapon.  The Tories’ big gun has already shown itself quite capable of reaching London, and if news reports are to be believed, its fire may be directed against UKIP in the coming General Election.  Let’s call it “Big Boris”.

Boris is a uniquely charismatic politician.  His bumbling persona is clearly an artefact designed to charm, but beneath it lurks a cold strategic vision which would do credit to a Bond villain.  Boris’ evident ambition, however, is not to dominate the world.  It’s simply to become Prime Minister.  And David Cameron knows that perfectly well.  He should.  He’s in the firing line.

All those formulaic phrases welcoming Boris’ decision to seek a seat for next year — “I want all my star players on the pitch” — were clearly delivered through gritted teeth.

Boris nevertheless has a down-side, and has enemies in his own party.  He is particularly criticised for playing fast-and-loose with previous commitments, especially since he appeared to promise that if elected as London Mayor, he would not seek to hold two jobs at one time.  That is, he would not seek a Westminster seat while Mayor.  Yet now he is proposing to do just that.

I thought he was uncharacteristically tentative in handling that criticism, and as a very experienced politician, should have done better.  I expected something like: “Look, I promised to focus 100% on turning London around and getting London’s economy back on track.  While there’s always more to do, that major task has been largely achieved” (I’m not sure that it has, but that’s what I’d expect Boris to say).  “Eight years is quite long enough for one man to be Mayor of this great city, so it’s time for me to look for new ways of serving the people of London, and of Britain”.  (And if the idea crosses your mind, Boris — No, I’m not available as a speech writer!).

But while Cameron may have big worries about Boris, Central Office see him as a huge asset in the coming General Election.  Boris is the charismatic Tory Eurosceptic who can sweep away the doubts and bring wavering sceptical voters back from UKIP to the Tory fold.

Boris has said that Britain can thrive outside the EU.  He’s right at that.  He’s also said that renegotiation should be a doddle, which is absolutely not true, and is clearly a deliberate obfuscation designed to embarrass Cameron.  Does Boris imagine that Brussels will accept immigration controls and abandon “the right of free movement”?  Does he think that the French will compromise on the CAP, or the Spanish on the CFP?  That Brussels will exempt the City of London from its draconian regulatory plans, or from its apocalyptic Financial Transaction Tax?  Boris knows perfectly well that they’ll give no ground on these key issues, and that renegotiation will be still-born.

Too many people are prepared to say “Better to stay in (or OK to stay in) if we get renegotiation”.  But that begs the question “What renegotiation?  What outcome?”.  I myself would even consider staying in the EU if it were reduced essentially to a free trade area, but that’s not going to happen.  More likely Dave will come back from Brussels, like Harold Wilson in 1975, with a few cosmetic details that can be talked up in the media, and the EU Juggernaut will roll on regardless.

Finally, of course, Boris is just one voice in a Tory Party which is, on the whole, committed to staying in the EU, under a Prime Minister who has never made clear what his renegotiation position is, and who has never indicated, under any circumstances, that he would campaign to leave the EU.  This is the Tory Party which (to a large extent) got us into this mess.  The Tory Party that talks a good eurosceptic story at election time, and then reverts to type.  For years I wanted to believe that the Tories would deliver on Europe, until decades of disappointment led me to leave the Tories and join UKIP.

Good luck Boris.  You’re great entertainment value.  But I don’t think that too many sceptical voters will be taken in.

22 Responses to The Tories and Big Bertha