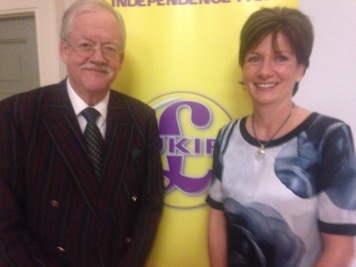 At the Chichester meeting with Diane James

On Friday, I travelled down to Chichester for a UKIP meeting in the Assembly Rooms – and I was delighted to see that they were flying the Union Jack (OK – for purists – the Union Flag) over the building, and not the EU’s sorry Crown of Thorns.

There were 180 seats in the hall, and by the time we started a couple of minutes after seven I had trouble in seeing any empty seats at all.  I was appearing alongside our parliamentary candidate for Chichester, Andrew Moncrieff, my colleague Diane James MEP, and someone I hadn’t met before but who has worked closely with Diane, Elena McCloskey, UKIP’s council candidate in Rogate.

Andrew Moncrieff has an interesting opponent in Chichester, Conservative MP Andrew Tyrie.  Tyrie is surprisingly realistic on climate and energy issues, but sadly is also a sell-out Europhile.  That should present some easy targets and quick hits for UKIP’s Andrew in the forthcoming battle of the two Andrews.

Elena McCloskey is a very interesting candidate indeed.  There was a slight foreign accent in her perfectly-articulated English, and we learned that she had come to Britain from Russia, started a successful business, and become a British citizen.  She gave a very impressive account of herself, and coming from a former communist country she had a very focused view of the values of democracy and self-determination.  She saw some disturbing parallels between Soviet totalitarianism and developments in the Brussels.

Diane delivered one of her marvellously professional and convincing speeches on the imminent threat posed to British citizens by the European Arrest Warrant.  If this coalition government carries out its plan to sign up to the EAW by December 1st, we’re stuck with it.  No way out except Brexit.  (Roll on the Day!)

I talked about our recent run of election results, and of course about energy — the dual threat to our security of supply, and competitiveness, as a result of failing green policies (and don’t miss Charles Moore’s splendid piece on this subject).  And Andrew ran through some detailed voting statistics that gave the lie to Cameron’s claim that “A vote for UKIP is a vote for Miliband”.  In Heywood & Middleton, 617 Conservative votes gave the seat to Labour.  In Chichester, Labour have no chance of winning, come what may.  It’s a two horse race between UKIP and the Tories.

All in all, a very successful meeting, with lively questions both during the session and informally afterwards.  UKIP is on a roll in Chichester.

I’d been in London earlier in the day, and I got to Chichester in time to have a look around.  It’s a delightful town, with lovely and interesting shops.  I daresay I’d been there before — I have a vague recollection of the theatre — but that was several decades ago.  This time I made a point of visiting the Cathedral.  Begun in 1076, 962 years ago, it is mostly Romanesque, with hints of early Gothic creeping into the later parts.  It was rebuilt after a fire early on, and again after the spire collapsed in 1861 — almost miraculously, without loss of life.  Workmen trying to shore it up were out to lunch.

Both the Cathedral volunteers, and the guide-leaflet, were keen to draw my attention to the Piper Tapestry, behind the high altar.  Woven in France in 1966, it seemed to me far too brash and sixties-modern, and out of place in the splendid and sacramental space of a great Cathedral.  Apparently a Victorian High Altar had been removed as “Out of keeping” with the tapestries, replaced by a modern stone alternative.  Personally, I’d have kept the Victorian altar and gone without the tapestries.

By contrast a High Altar Frontal tapestry by G.F. Bodley (1900), in sumptuous shades of red and gold, was redolent with order, reverence and beauty.  But it was relegated to a side aisle, and neither the volunteers not the guide made any reference to it.

But perhaps the high point of art in the Cathedral was the magnificent Arundel Tomb (what’s the Arundel Tomb doing in Chichester? I hear you ask.  I also asked, but no one seemed to know). It shows a mediæval couple side by side in death.  He is in armour, and has his right gauntlet in his left hand, while his un-gloved right hand discreetly holds that of his wife.  A touching detail immortalised by Philip Larkin in his poem “An Arundel Tomb”. Do read it.

17 Responses to Public meeting in Chichester