Posted on January 6, 2015 by rogeroffice 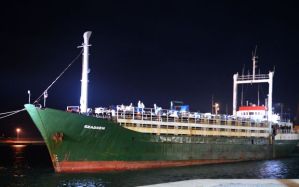 It would be a hard-hearted individual who did not feel a profound sense of pity for the refugees – mostly Syrian – who were aboard the Ezadeen, a dodgy freighter used by people-traffickers, but abandoned on auto-pilot within sight of the Italian shore.  Some 360 were on board.  A few days previously the Blue Sky M with 800 passengers was picked up in a similar way.

These people have suffered appalling privations in their home country – in the case of Syria, a long-running civil war, with no end on sight, which has given rise to perhaps millions of refugees.  There are reportedly over a million Syrian refugees in Lebanon alone. http://www.bbc.com/news/world-middle-east-30685174

Some media reports suggest that Italy received 100,000 migrants by sea in 2014. Thousands more wait in Africa, hoping to reach Spain or Italy.

The UNHCR says that in 2013 more than 50 million people around the world were displaced by war, civil unrest and other emergencies.

Of course our first instinct is to rescue these people, who are cold, hungry and thirsty, and at risk from the sea.  So we bring them ashore.  But we know perfectly well that few if any will ever go back.

So let’s stand back and look at it dispassionately.  The message we are sending to potential migrants is “OK, the crossing may be expensive, and dangerous, and profoundly uncomfortable.  But if you get anywhere close to the shores of Southern Europe, Bingo!  You’ve made it.  You are (almost literally) home and dry”.

And the message we are sending to the traffickers?  “We’re here to help you.  You just get the migrants within sight of shore, and we’ll do the rest.  We’ll make good your promises.  We’ll take these people and find them homes and food and clothes – and there’s virtually a zero chance that any will be sent back.  You don’t need to make up stories about how the migrants will be welcomed – we’ll make it all good.  We’ll do your promotion for you, and ensure that your next ship is full, and the one after that”.

This is moral hazard and perverse incentive on a grand scale.  We tell the migrants not to come, we condemn the traffickers, we create a useless and impotent EU Frontier Force “Frontex”-  but the real story is exactly the reverse.  The actions we take, the policies we apply, make it inevitable that this cruel trade continues.

Then up pops the UNHCR Spokesman on BBC television, and what does she suggest?  “We must make more resources and facilities available.  We must share the load across Europe.  We must re-settle these people”.  To paraphrase in the vernacular: “Let ’em all come”.

But according to the UN, there could be fifty million a year who might want to come.  This is impossible.  Europe cannot be the global repository of all the poor and dispossessed of the world.  Indeed the moral hazard is even broader than I’ve indicated.  We’re saying to conflict-prone countries around the world: “By all means have your wars.  Wreak havoc and destruction.  And we’ll provide a safe haven for the millions of your dispossessed – and by the way as soon as things quiet down we’ll send peace-keepers and funds and resources for you to rebuild.  Until the next conflict”.  These people must understand that conflict carries heavy costs, and that they cannot forever expect Europe to make good the damage.

Politicians hate to recognise it, but across Europe – in Germany, in Italy and Spain, in Britain – patience is running thin.  The impact on social cohesion and social infrastructure is becoming unsustainable.

So what should we do (and I stress here that I speak in a personal capacity – this is not UKIP policy)?  Of course as far as we can we should rescue these people from the sea, and give them immediate aid and succour.  But very soon after that we should put them under guard on seaworthy vessels and send them back to wherever they came from – in the Ezadeen case, to Syria.  We only have to do that a few times, and the message will get through.  The flood will become a trickle.

Of course there will be problems.  Diplomatic, logistical, security, and legal problems.  No doubt.  But there are also problems in letting them stay.  Social, political, cultural, economic.  These could justify discussion at length, but perhaps the legal issues are the most salient.  We are party to treaties on asylum (and the definition of “asylum” seems to be stretched so thin that almost anyone who claims asylum qualifies).  But those treaties were never intended to deal with a world in which there might be fifty million refugees in a year.  If the effect of the treaties, in the 21stcentury, is that there is simply no limit to the numbers who must be admitted, and accommodated, and supported, then I’m afraid we have to admit that the Treaties are no longer sustainable, and they have to be changed.

As I have said before, if you wake up one morning and find a starving child on your doorstep, you will feed it.  If you find a dozen, you will do your best.  But if you find ten thousand, you will call the Army.  We can’t go on like this.