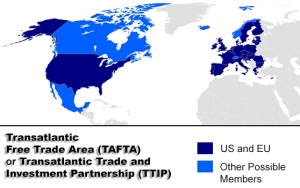 There seems to be an unhelpful (if inadvertent) alignment between the interests of the green lobby (or as Owen Paterson aptly describes it, the “Green Blob”) on the one hand, and the tabloid press on the other.  Both thrive on scare stories, and promote them in an uncritical way.  For the press, scares sell papers.  For the Green Blob, the scares justify their existence, buy them airtime, and keep the contributions coming in from the gullible.

The big daddy of current scare stories is, of course, Global Warming (or as we have to call it in these days, when there hasn’t been any warming for eighteen years, “Climate Change”).  Maurice Strong was one of the prime movers of the climate scam, and he is on record as saying: In searching for a new enemy to unite us, we came up with the idea that …. the threat of global warming would fit the bill ….. the real enemy then is humanity itself …..we believe humanity requires a common motivation, namely a common adversary in order to realise world government. It does not matter if this common enemy is a real one or …..one invented for the purpose.”

Clearly he was simply using the threat of AGW to push a particular world view.

But there are other scares.  The green lobby and the media have picked up the minor problems associated with shale gas operations and blown them up into a monster which appears to have terrified most of the Home Counties, and large parts of the North West — despite the clear fact that shale gas is cleaner and safer than (say) coal mining.

Then there’s the GMO argument, with the greens forecasting doom and destruction from GM crops — “Frankenstein foods” — despite the fact that we’ve all eaten GM produce, and eaten meat that’s been raised on GM soya, for decades, without any identifiable harm.  All the green campaign is doing is to shut Europe out of a vital new agricultural technology which the rest of the world is enthusiastically embracing.

A minor but damaging example is that of palm oil.  The greens appear to have convinced themselves that palm oil represents an existential threat to the orang-utang.  This is simply not the case — I was seeing orang-utangs in Sarawak just a few weeks ago.  And both Indonesia and Malaysia (the primary sources of palm oil) have very comprehensive policies in place to protect the forests and the apes’ habitat.  Nonetheless the concern for the orangs is transmogrified into a series of unjustified scare stories about the health benefits and risks of palm oil.  Palm oil is more or less ubiquitous in both processed food products and in toiletries, and the green campaign is reprehensible, doing damage to developing countries seeking to provide rural employment.

And then there’s TTIP — the Transatlantic Trade & Investment Partnership, currently under negotiation.  A couple of days ago, I got a frantic text from a UKIP candidate.  “There’s a spat on Twitter — they say you voted for TTIP!”.

Of course TTIP is in an early stage of negotiation.  At this stage no one knows what will be in it, and it’s strange to see people taking up entrenched positions on a deal that doesn’t yet exist.  Yet its opponents are perfectly happy to assert, as if it were fact, exactly the damage they fear.

Let me put in a caveat: we in UKIP would far rather see a bilateral UK/USA free trade agreement — indeed but for the EU, I suspect we should have had such an agreement decades ago.  But right now, sadly, we are in the EU, and until we get out, the only USA FTA on the table is TTIP.  And we in UKIP are in favour of free trade in principle.  Free trade means jobs and prosperity and growth.

There is nothing new in free trade deals.  The EU has such deals, or is negotiating them, with a majority of the countries in the world.  The EU/Korea trade deal raised serious concerns, not least in the European auto industry.  But the deal seems to be working out rather well, and (perhaps surprisingly) more to the benefit of the EU than of Korea — though I believe it’s a win-win deal from which both parties will benefit over time.

(In case you’re worried about where we stand on these deals when we leave the EU — they will be grandfathered.  Don’t believe the scaremongers who naïvely assert that we lose those benefits on Brexit).

The two main concerns of the opposition are NHS and ISDS.  On the NHS we can be very clear: the EU is not proposing, and UKIP would not accept, any deal that represented any threat to the NHS.

On ISDS — the “Investor/State Dispute Settlement” procedure — the position is less clear.  Opponents say it enables mega-corporations to ride rough-shod over the democratic will of independent countries.  What it in fact does is to enable companies to call states to account if those states fail to deliver on the treaties they have entered into.  Sovereign democratic nations have an absolute right to sign up — or not sign up — to international agreements.  But if we believe in the rule of law, they should then stick to those agreements, and if in failing to stick to them they disadvantage citizens, or commercial interests, then I can’t see a problem if those disadvantaged citizens or commercial interests seek redress.

Clearly these are areas we need to watch closely, and UKIP will be at the forefront of opposition if we believe that our national interests are threatened (though as long as we’re in the EU, we may not be able to stop any proposed deal).  But we believe that transatlantic free trade offers major benefits to jobs, growth and prosperity, and we will not join the blind, knee-jerk opposition to TTIP before we know what’s in the text.

28 Responses to Scare stories. And TTIP.