The Migrant Crisis: Europe is letting us down 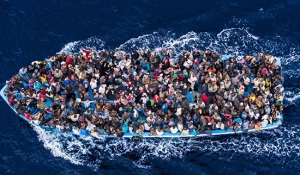 On Sunday evening, I watched an extended interview on BBC 4 TV in which Lucy Worsley interviewed Sir Roy Strong, at eighty years old.

So you might have thought that he’d have been a typical leftie luvvie.  But not a bit of it.  Also an historian, he adopted a very common sense view of immigration issues.  He felt that multiculturalism had failed.  It had been divisive and undermined social cohesion.  Citing the Huguenots and the Jews, he recognised the right of immigrants to maintain and celebrate their own culture of origin, but insisted that if they wished to settle in Britain immigrants must also embrace and recognise the values and culture of this country.

That day I was invited to appear on the Stephen Nolan Show on BBC Five Live (about 20 minutes in) alongside Don Flynn of the Migrants Rights Network.  Mr. Flynn seemed to take the view that everyone who faced serious problems at home, and wanted to come to Europe, should be free to do so.  And that Britain should take its “fair share” of migrants.  Europe (he said) was rich, and had the space and resources to cope with large numbers (perhaps Mr. Flynn would do well to read the economic and financial pages more carefully).

Germany, of course, reckons it will take in 800,000 migrants this year, and is calling on other EU member-states to take “their fair share”.  Mr. Flynn also reckoned that we had an obligation of burden-sharing: I asked which clause of the EU Treaties committed us to do so.  We need to understand that Germany (and other EU member-states) potentially have a gun to our heads: all they need to do is offer citizenship and issue passports to those migrants, and they will be free (under EU free movement rules) to come to the UK.  Spain has already given large-scale amnesties to migrants.

I argued that Germany had been foolish to accept these large numbers, and had no business to demand that we accommodate its rash policy.  I argued that European policy was failing us twice over.  First, the EU is supposed to have a Border Force, Frontex, whose task is to protect EU borders.  It is failing utterly.  We simply should not be admitting these illegal immigrants in the first place.  Secondly, we have the Dublin Convention which specifies (broadly speaking) that an asylum applicant should apply for asylum in the first safe country.  But Hungary, Greece, Italy and France and other member-states are allowing migrants to cross their territory at will.

Mr. Flynn seemed to assume that just about all these migrants were entitled to asylum, and dismissed my suggestion that many were economic migrants.  The danger is that we have allowed the criteria for asylum to broaden without limit.  Mr. Flynn seemed to assume that anyone from a war zone, or a country suffering civil unrest, ought to qualify.  But the consequent numbers would run into many millions, which surely even in Mr. Flynn’s parallel universe is clearly unacceptable.

I remember an attempt in the European parliament some years ago to broaden the definition of asylum criteria.  It was proposed that any woman who at any time had been subjected to Female Genital Mutilation (FGM) should ipso facto be entitled to asylum.  Be in no doubt that I unequivocally condemn FGM as a vile and brutal infringement of human rights.  But I cannot agree that (say) a middle-aged African woman who suffered FGM forty years ago should therefore automatically qualify to settle in Europe.  I believe we estimated at the time that at least 15 million would qualify on that basis.  The rules on asylum are predicated on the implicit assumption that the total numbers involved must be tolerable.  Otherwise the whole asylum system will lose public consent and democratic legitimacy.

So with thousands of migrants arriving in short order, many undocumented, how on earth are our border forces supposed to distinguish the genuine asylum seeker from the economic migrant?  (Let us note in passing that at least those Iraqi interpreters now under threat are unequivocally asylum seekers, and deserve our gratitude and protection).  But the broader question is beyond our power to determine, and the court system is bogged down by interminable and irresolvable appeals.

Quite apart from the sheer numbers, and the consequent pressures on social infrastructure and social cohesion, there is the question of how we could accommodate very large numbers of migrants with very different cultural attitudes.  I was struck by a recent press story about a French family who, moved by compassion, offered a home to a migrant in Calais.  He accepted the offer — but also saw fit to criticise the family’s 20-year-old daughter for not being married, and for not covering her hair.  Not an easy attitude to deal with.

Quite apart from cultural attitudes, there is also the possibility that the flood of migrants includes terrorists and jihadis deliberately infiltrating at the behest of ISIS.  Mr. Flynn dismissed this as mere prejudice and anti-Islamist propaganda.  But there is no doubt that ISIS has claimed to be engaging in this activity, and it would be a brave man who assumed they were lying.

I argued that our policy of rescuing boats in the Med and bringing the migrants to Italy is in effect, if not in intention, collaborating with the people-traffickers.  “Just get out on the water”, they can say, “and the Europeans will rescue you and take you to Italy”.

So what should we be doing?  First, we should intercepting the boats in the Med (yes, and rescuing the drowning), but returning them to North Africa.  Do that for a few weeks, and the trade will wither on the vine.  The boats will stop, and the drowning will stop.

Secondly, we should urge our European partners to make their borders secure (however little faith we have in their will or ability to do so).  But for Britain, we should put in effective border controls.  We should have a rigorous and rapid approach to asylum, and only accept asylum claims that are clear-cut and specific.  The onus must be on the applicant to prove the case.  And any illegal immigrants arriving in the UK from other EU member states (as most do) should be returned under the Dublin Convention to the last country they were in (and the Mayor of Calais can just get used to the idea).

Many commentators say that the only way to solve the migrant crisis is to take action to bring peace and prosperity to the countries from which the migrants are coming.  It’s a great idea.  But we’ve been trying to do that for many years without conspicuous success — indeed some would argue that our interventions have made matters worse.  By all means we should seek peace and prosperity in the world, but that’s an uncertain and long term project.  In the meantime, the migrant problem is real and immediate.  We in UKIP criticise the UK’s grossly excessive level of foreign aid — but as long as the budget is there, it should be used to facilitate the return of would-be immigrants to their countries of origin.

And how will we afford the extra border guards?  Well it is clear that the long-term costs of coping with a massive migrant influx will be greater that the costs of controlling our borders.  And again, we could divert money from the foreign aid budget to border control.

Sadly, I don’t see the present government adopting these measures any time soon.  And I fear that a few million pounds spent on wire mesh at Calais won’t really hack it.

27 Responses to The Migrant Crisis: Europe is letting us down