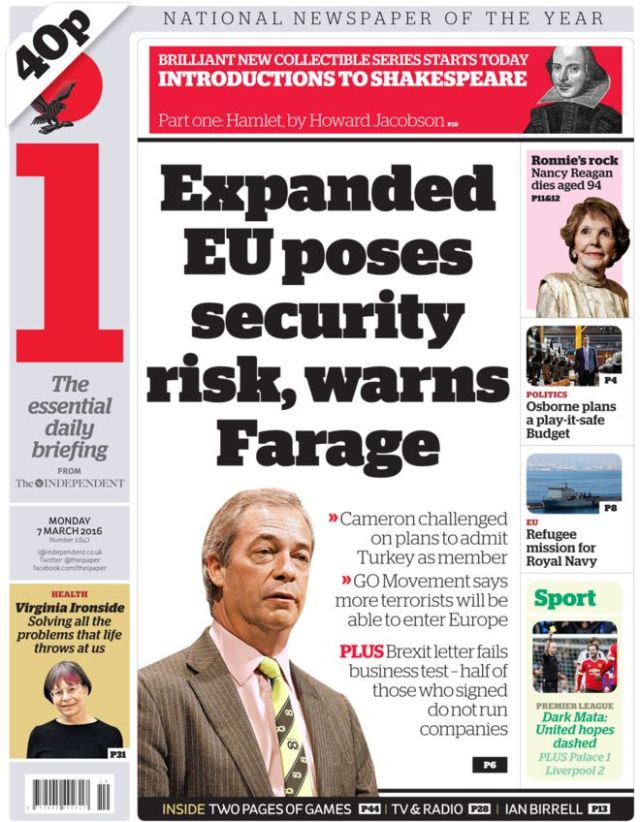 Send in the Navy

Several papers major on the story that the RFA Mounts Bay is being sent to the Aegean on a NATO mission. It’s not clear why this is a big story today – I mentioned it in my Debrief on March 5th. But there are now phrases about blocking traffickers and sending migrants back, which suggests a more robust approach.. The Guardian adds another element to the story. IT says that David Cameron is heading to Brussels for an emergency summit on migration.

The FT reports “Brussels bid to centralise asylum systems”, and with remarkable perspicacity adds “risks Eurosceptic anger”. Typical Brussels response: the universal solution to any crisis is to grab new powers and centralise everything.

The leading headline in The “I” paper reads “expanded EU poses security risk, says Farage”. The story points to the risk of Turkey joining the EU, plus the danger of Jihadists arriving amongst the waves of migrants.

The Mail headlines “An honest man knifed by Number 10”, amongst strong indications that Cameron’s team put pressure on the BCC Board. The BBC (keep up there!) reports that Mr Longworth, previously “suspended”, has now quit. The Referendum Campaign is getting down and dirty.

Ronald Reagan was the most popular President of recent decades, and his wife Nancy was an elegant, distinguished and supportive presence at his side. The papers report her passing. The world will be a poorer place without her.

The Telegraph reports the Charities Commission is taking action several green groups, including Friends of the Earth, (or, as I think of them, ‘Enemies of the People’), Greenpeace, the Wildlife Trusts and ‘environmentalists for Europe’.

An unhealthy convergence of interests, almost a symbiosis, has developed between the European Commission and green groups, who gain influence and/or receive funding in exchange for stroking Commission egos and supporting Commission positions.

Taxpayers will be rightly angry their money is being used by the Commission to undermine the campaign for our country’s independence.