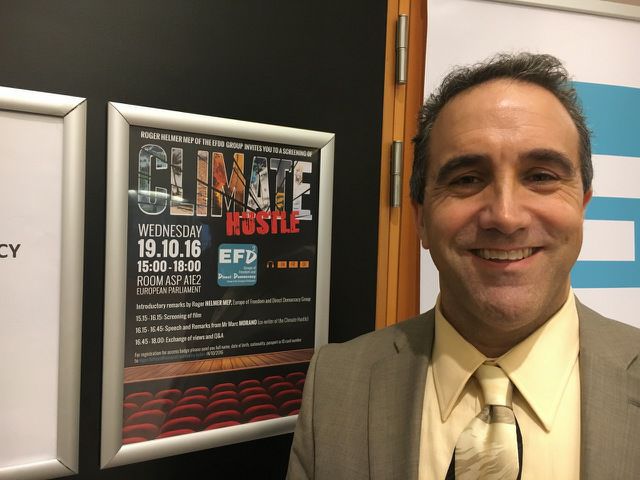 One of the privileges of being a member of the European parliament is that one has the opportunity to be utterly heretical, and to challenge the shibboleths of its right-on, politically-correct attitudes.  And if there is one right-on politically-correct obsession at the heart of the institution, it’s the commitment to the new religion of global warming.  I’ve often remarked that while energy policy-makers in the Commission claim to have a three-legged energy policy prioritising energy security, competitiveness and “sustainability”, all they really care about is “the fight against climate change” and cutting CO2 emissions.

So why did I put “sustainability” in quotes, I hear you ask?  Answer: because the policies falling under the rubric of sustainability are simply unsustainable.  Why are they unsustainable?  Because they conflict with the other two objectives, much vaunted on paper but ignored in reality.  The over-commitment to renewables means that Europe has some of the least competitive energy prices in the world.  And over-reliance on intermittent renewables, coupled with policies to close coal-fired capacity (and in Germany, nuclear capacity as well) is now jeopardising security of supply.

The bitter irony is that energy pricing is driving energy-intensive industries out of the EU altogether, taking their jobs and their investment with them.  And they mainly go to jurisdictions with lower environmental standards, thus increasing global CO2 emissions.  The policy fails in its own (highly compromised) terms.

Against this background, I was delighted to welcome Marc Morano  and his colleague Chris Rogers to the Brussels parliament for the very first Belgian screening of their movie “Climate Hustle”  Marc is the main man at Climate Depot, a project of CFACT and is the co-writer and presenter of the film.  And before you ask, no, Marc is not a climate scientist (but of course, neither are most of the IPCC’s “experts” either).  He is in fact an investigative journalist who has devoted much of his career to challenging the claims of the global warming lobby.

The movie was shown to an invited audience in our group meeting room in Brussels to a diverse audience of MEPs, staffers and external visitors.  It was followed by a lively Q&A session, which was not entirely dominated by the sceptic faction.  There were several perceptive but respectful questions from a pro-orthodoxy position.

While the movie covered much ground that I found familiar, I personally found it hugely encouraging – not least the number of interviews with highly qualified climate scientists like, Judith Curry , who started out accepting the scientific “consensus” uncritically, but were prompted to take a closer look by the evident contradictions in the orthodoxy, and switched to a sceptical position – despite the damage that involved for their careers.  They deserve our respect.

Given my own experience as a (fairly) lone voice in the climate debate in the EP, the movie’s affirmation of my own views was hugely encouraging, and I am grateful to Marc Morano and to Climate Depot for coming to Brussels.  They are working on a sequel, and are flying on to Prague to interview inter aliaVaclav Claus – a hero in the climate wars.