The Lessons of Lysenko 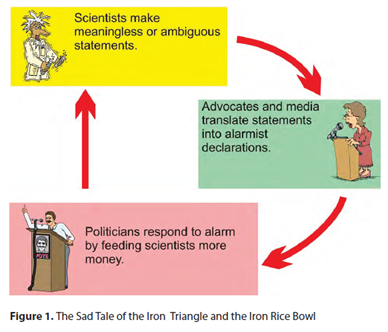 Following the death of Fidel Castro, it’s perhaps a good time to think about the malign impacts of totalitarian government, and the damage that political agendas can do to science.

I was recently discussing Lysenko with a friend (as you do), and naturally we turned to Wikipedia to clarify a point.  And I came across a quote that hit me between the eyes (figuratively speaking);

“The term Lysenkoism can also be used metaphorically to describe the manipulation or distortion of the scientific process as a way to reach a predetermined conclusion as dictated by an ideological bias, often related to social or political objectives”.

Dear Reader, you’re way ahead of me.  Yes of course, I was struck immediately by the read-across to climate science.  The parallels are remarkable.

You’ll be familiar with the story of Lysenko.  He was a Russian biologist and agronomist who rejected Darwinian evolution and the rôle of genes, and preferred instead the Lamarckian concept of “inheritance of acquired characteristics”.   Of course that concept is difficult to accept – especially when you reflect that a man who has lost a leg is perfectly capable of fathering a child with two legs.  With the benefit of hindsight, it is difficult to believe that Lamarckism was once regarded as a credible alternative to Darwinian theory – but so it was.

And Lysenko, in the late 1920s, took that view, and built a whole theory of plant breeding on it.  More than that, he had the ear of Stalin, and Lysenkoism became official Soviet doctrine.  The theory was imposed rigidly.  More than 3000 mainstream biologists were fired, imprisoned or executed for challenging it.

Lysenkoism held sway in the USSR until the sixties, with dire consequences for Soviet agriculture.  Again with hindsight it is difficult to credit the fact that it survived so long, when plainly it did not work.  But worse than that, not only did it fail in the field (literally), it also totally blocked proper academic study and research in Russia in the area of plant breeding and Mendelian genetics for decades.

So how close are the parallels with climate theory?  Of course Lysenkoism was restricted to the USSR.  And it was imposed by a totalitarian régime that could, and did, shoot dissenters.  Climate alarmism, on the other hand is broadly speaking global (even if some countries merely pay lip-service to the orthodoxy).  It is imposed not by a violent autocracy, but by an intolerant and often vindictive establishment – scientific, media and political.  It threatens not imprisonment and murder, but the destruction of careers.  Scientists who dare to challenge the prevailing view are denied tenure, and publication, and perhaps worst of all, grant funding.  As a result, those who do dare to challenge the orthodoxy tend to be older scientists secure in their careers (and their pension funds).

In fact the parallels with the Soviet Union go further.  On the outer fringes of the Warmism movement we see demands for “Nuremberg-style trials” of “climate deniers” and the imprisonment of directors of fossil fuel companies.

Nor is it just scientists and company directors in the firing line.  The BBC, for example (always achingly, painfully “on message”) seeks to exclude climate sceptics, and it famously dropped David Bellamy, who was once nearly as popular a presenter on nature and wildlife issues as Attenborough, merely because he dared to express doubts about Global Warming.

We saw with the ClimateGate scandal how leading IPCC scientists engaged in “the manipulation or distortion of the scientific process as a way to reach a predetermined conclusion as dictated by an ideological bias”, just as Lysenkoism does.

We see that their prescriptions are utterly failing.  Björn Lomborg famously demonstrated (for example) that all the hundreds of millions of dollars invested in solar panels by Germany would have the effect (on the IPCC’s own estimates) of delaying the trajectory of global warming by only a few hours — by 2100. An utter waste of money and misallocation of resources.

Now, of course Warmism has become a multi-billion dollar industry, with money flooding in from governments, think tanks, academia and the capital markets.  The vested interests are huge.  It is both comical and pathetic to hear green apologists still complaining about “fossil fuel funding for climate denial” when any spending of that kind is utterly dwarfed by funding for the Green Blob.

And just as Lysenkoism prevented Russian agronomy from doing the right things, so Warmism, by focussing on mitigation, blinds us to the possible need for adaptation (in the unlikely event that warming becomes a significant problem).

Wealthy economies and societies are far more resilient to adverse conditions.  But prosperity depends critically on the availability of secure and affordable energy – which mitigation and greenery militate against.  Warmism prescribes vast up-front investment to guard against highly speculative and uncertain long-term outcomes.  By the time you realise you’re wrong, you’ve blown billions.  Adaptation on the other hand is proportionate, and involves spending money on targeted projects only as and when (and if) circumstances justify it.

The main difference between Lysenkoism and Warmism, as I see it, is that the damage done by Warmism is on a far larger scale and will be far more difficult to reverse.

25 Responses to The Lessons of Lysenko