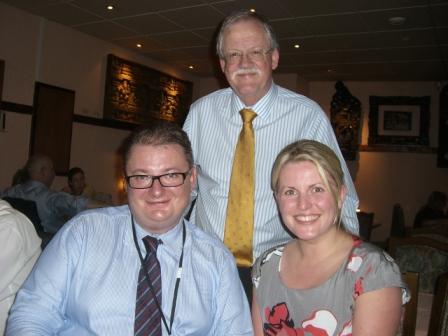 The leader of our new Group in the European parliament, the European Conservatives and Reformists (ECR), is the Polish MEP Michal Tomasz Kaminski.  He is a very sound conservative, and a good friend of mine, and I am delighted that he is the leader of our new group..  As a teenager in communist Poland, he listened covertly to the BCC and the Voice of America on a clandestine radio set, and he was inspired by Margaret Thatcher and Ronald Reagan.  He decided he wanted to be a conservative, and a parliamentarian, and he achieved both ambitions.  Elected first to the Polish national parliament, he is now an MEP.

I have travelled with him to America to visit Republican organisations, and the story of how he came to be a conservative goes down a storm in the US.

So it comes as a bit of a surprise to me to find that he is taking some stick from left-leaning British media like the BBC and the Guardian, and worse yet from recently-expelled Conservative MEP Edward Macmillan Scott, for his “racist and homophobic views”.  I have, needless to say, never heard Kaminski express any such views, despite spending quite a lot of time with him.  It was Macmillan Scott, of course, who set out to undermine our new group by making a solo run for the Vice-Presidency of the parliament, in opposition to the new group’s official candidate, Kaminski.  It is clear that Macmillan Scott, who never wanted to leave the EPP, is setting out to destabilise our new group.  Indeed he is openly speculating about whether it will survive.

Kaminski in turn has threatened to sue Macmillan Scott if he repeats these views.  It seems that Kaminski’s grandfather fought against the Nazis, and it is preposterous to suggest that Kaminski might have any sympathy with racist or fascist views.  On the contrary, he has devoted his political career to promoting freedom and democracy, and the independence of his country, and to opposing totalitarianism.

The accusation of homophobia seems to be based on the claim that Kaminski voted against homosexual “marriage”.  I have no idea whether this is true, although it is certainly the case that his Polish colleague, Konrad Szymanski MEP, has said “We are opposed to homosexual marriages …that is how our MEPs will always vote”.

Now I regard myself as liberal and tolerant on the question of homosexuality.  I have no interest in telling consenting adults what they may or may not do behind closed doors.  I have a number of colleagues whom I believe to be homosexual, and that causes me no problems at all.  Indeed there may be more people that I work with, who may be homosexual without my knowing it, since (as a friend once remarked) my “Gay-dar” is poorly developed.  I am content to treat people as people, regardless of race or gender or sexual orientation.

But I am, nevertheless, opposed to the concept of homosexual “marriage”, on both semantic and social policy grounds.

The institution of marriage has been fundamental to virtually all societies through the whole course of human history, and marriage means the union of a man and a woman, usually with the implicit potential of procreation.  That is what the word means.  I have no problem with a same-sex couple setting up home together, but it devalues language — and the real institution of marriage — to call such an arrangement “marriage”.

But the problem is not merely semantic.  Many people naïvely argue that marriage is a private matter between two people, so it is up to them how they organise it.  But it is not.  Wherever the institution of marriage exists, it is a public contract between three parties — a man, a woman and society.  Society recognises that marriage, and the nuclear family which may result, is fundamental to the stability and the future of the society itself.  There is overwhelming evidence that children raised in conventional families do better on a whole range of measures than children raised outside marriage.  This is not to denigrate single parents, who may do a fine job in difficult circumstances.  It is simply a statistical fact.  And society therefore recognises marriage, both in local and informal terms, and more formally and generally through the fiscal, legal and welfare systems.  There is no comparable societal reason to recognise same-sex relationships.

That is why I think our Polish colleagues are right to vote against homosexual marriage, and why I would join them in doing so.

And while we’re mentioning semantic issues, let me point out that the neologism “homophobia” is not so much a word as a political agenda.  In psychiatry, a phobia is defined as an irrational fear.  I have yet to meet anyone who has an irrational fear of homosexuals, or of homosexuality.  So to the extent that the word has any meaning at all, it describes something which simply does not exist.  “Homophobia” is merely a propaganda device designed to denigrate and stigmatise those holding conventional opinions, which have been held by most people through most of recorded history.  It is frightening evidence of the way in which political correctness is threatening our freedom.  It is creating “thought crimes”, where merely to hold a conventional opinion is seen, in itself, to be unacceptable and reprehensible.  I’m sorry, but I don’t buy it.

95 Responses to Poles take some stick