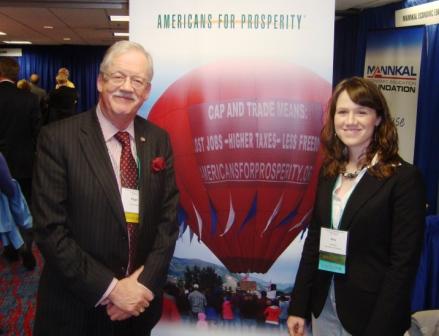 I’ve just returned from the Heartland Institute’s Fourth Annual Climate Conference, at the Marriott Hotel in Chicago, where something very interesting was emerging: a clear counter-consensus on climate change.  Of 700+ delegates, 400 or so were scientists in relevant disciplines – arguably more than on the IPCC’s much vaunted panel (after you allow for non-scientists, scientists in irrelevant disciplines, and dissenting reviewers).  These scientists came from around the world, and from highly respected academic institutions.  They were by no means unanimous, but all (except for two token Warmists) agreed that the IPCC “consensus” is deeply flawed, and that the policy prescriptions based on the IPCC’s work are extremely unlikely to deliver significant results.

Much of what we’re told about global warming is just plain wrong. Sea level rise is close to zero – yet we terrify our children and give them nightmares with talk of global inundation.  Cyclone activity is not increasing (although insurance liabilities are, since more people buy more homes and more insurance).  Polar bears are increasing in numbers.   Certainly some species are going extinct, but that’s driven by population pressure, habitat destruction, and forest clearance for agriculture – not climate.

I’ll try to cover some of the key topics from Chicago, simply on a top-line basis.  For background and references, Heartland are committed to getting all the major speeches and presentations up on theirweb-site at http://www.heartland.org, as quickly as possible.

CO2 is not a pollutant: There was some anger at the Conference over the US EPA’s decision to designate carbon dioxide as a pollutant: you might as well call oxygen a pollutant.  CO2 is essential to life on earth.  We exhale it with every breath.  CO2 is air-borne plant food.   Elevated CO2 levels dramatically increase plant growth rates – vegetable growers routinely increase CO2 levels within greenhouses by a factor of three, from an ambient 390 ppm approx to 1200 ppm.  So much is familiar.  What I hadn’t quite grasped before is how low current CO2 levels are compared to most of Earth history.  Al Gore may be right that today’s atmospheric CO2 level is the highest for 100,000 years, but seen against the last 500 million years, the level is close to an all-time low. Indeed it’s dangerously low.  Botanists tell us that if the level were to be halved to below 200 ppm, plant growth would effectively cease, and all life on the planet would be at risk.

CO2 levels in the past have been well over ten times today’s level – yet we never saw “Run-Away Global Warming”.  Nor did we see ocean acidification.  There are chemical buffering mechanisms in the oceans that sequester CO2 in the form of calcium carbonate – chalk.  There have been six major Ice Ages during the history of the earth, and each one started when atmospheric CO2 levels were much higher than today.  History and geology show that atmospheric CO2 does not, in fact, drive climate.  Equally, there have been substantial and rapid climate shifts in the past – for example during the Younger Dryas around 12 to 14,000 years ago, when we saw 10 degree changes in a few decades – which were clearly unrelated to CO2.

I remember that I was particularly annoyed with the European Commission recently, when in reply to a question from me, they assured me that recent changes in mean global temperatures were so dramatic that they could only have been caused by human activity.  Yet in the last hundred years we’ve seen a change of only 0.7 degrees C.  Far from “dramatic”, that’s in fact rather small, and entirely consistent with the 1000 year cycle from Mediaeval Warm Period to Little Ice Age to a new 21st century Optimum.  The change is trivial compared to the Younger Dryas changes, and the Commission is both ignorant and wrong.

Alternative scenarios: One of the curious things about the climate debate is that we face a poorly understood and chaotic multifactorial phenomenon – the climate – yet we pick on one single factor, a minor trace gas in the atmosphere – and insist that CO2 is the only thing that matters.  A Heartland booklet circulated at the Conference, “Seven Theories of Climate Change”, outlined six credible alternative scenarios.  Briefly: one is the “bio-thermostat” – the idea that negative feedbacks from chemical or biological processes off-set any warming that might be caused by CO2.  Second is Cloud Formation and Albedo, an important area very poorly represented in the IPCC computer models.  Third is “Other human forcings” – changes in landscape from agriculture, city-building and so on.  Fourth is major changes in ocean currents, which exercise a large but poorly-understood influence on global climate.  Fifth is astronomical cycles – the Milankovitch cycles are clearly implicated in the long-term pattern of climate and Ice Ages.  And sixth is solar variability – also shown to have major climatic impacts.  I am not championing any one of these alternative theories, but each has as much claim to consideration (and research dollars) as CO2.  It’s bizarre that we ignore them.

Feedbacks: Much of the technical climate debate centres on feedback effects.  Even the Warmists themselves will admit that CO2 alone would exercise a rather small effect on climate, but they postulate powerful positive feed-back effects that could magnify the primary effect of CO2 by three or four times.  However they are unable to demonstrate these effects, and sceptical researchers are arguing that negative feed-backs, offsetting any warming from CO2, are more likely (see alternative scenarios above).  This is at the heart of the debate.  It seems very strange that we are proposing vast policy initiatives at almost unimaginable expense, when these questions are still unresolved.

The Earth is probably cooling: Several speakers were strongly of the view that we can expect global cooling for the next few decades (and of course there has been no net warming for more than a decade).  Two major cyclical factors have “turned” in recent years.  Both the sunspot cycle, and the Pacific Decadal Oscillation, have now switched to cooling mode.  Time to buy a 4×4 before the snow comes.  A more extreme but plausible view is that the current Interglacial Period, based on previous experience, is due to come to a close soon, so we could anticipate the resumption of major glaciation before too long.

I once had a blog comment from a Warmist, who said, in effect, “The greenhouse effect is a proven scientific fact; CO2 is a known greenhouse gas: and therefore global warming is indisputable”.  That’s a bit like saying “Candle flames emit heat: so if you burn a candle in your house you will get warm”.  No you won’t.  You need central heating.

We are seeing increasing public scepticism on climate change – not least as a result of the University of East Anglia CRU revelations.  People are sick of being bullied and blamed for global warming, and are increasingly disillusioned with “Green Taxes”, which they rightly recognise are more about raising revenue than saving the planet.  As I’m fond of saying: “We don’t believe it.  We won’t vote for it.  And we won’t pay for it”.

11 Responses to Climate: A Counter-Consensus Emerges